‘I bought my first saxophone with school fees’ 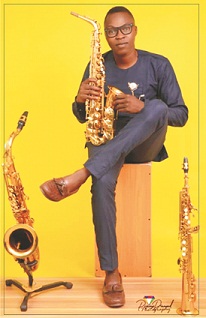 ‘I bought my first saxophone with school fees’

By Johnson Balogun
|
An upcoming saxophonist in Ekiti State, Ojo Oluwatobi Ebenezer popularly known as Eben Sax has said that his aim for playing saxophone is to publicize the Gospel of Jesus Christ all over the world which made him to buy his first saxophone with his school fees.

The artiste who disclosed this in an interview with Friday Extravaganza noted that he developed passion for the instrument since his childhood, but due to environmental factors, he was unable to start then.

He stated that he was motivated to learn it when he saw an eight year-old boy playing saxophone in Lagos and from there, he went on to develop his career.

Eben Sax who hails from Imesi, in Ekiti State boasted that he can play for hours non-stop.

The artiste who has been playing saxophone professionally for over 13 years said that he is always excited when he plays it.

“I grabbed the basics from my Boss named Fran Sax who currently lives in Lagos and I bought my saxophone in the year 2013 with my school fees which triggered the passion I have for it. I got inspired and fell in love with it.

The saxophonist who attended College of health, Ijero Ekiti and currently a student of Ekiti State University identified his role model to be Olatunji Francis popularly known as Fran sax.

He expressed that he plays for free whenever he is invited to church to perform.

He mentioned some of his main challenges to include financial constraint.

He advised upcoming saxophonists to be focused and never allow environmental factors to destroy their dreams.