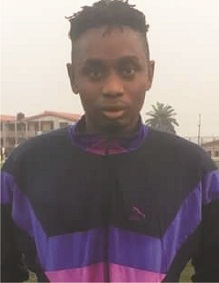 By Mercy Idiase
|
An upcoming footballer and a diploma holder in Sports Science from Federal University Technology Akure (FUTA),  Nelson Mercy has narrated how playing football makes him to forget his problems.

Nelson, who stated this during a chat with The Sporting Hope at the Ondo State  Sports complex Akure, said he got interested in Football at a very tender age of seven.

According to him, “I love football because I have passion for it , football was never forced on me, as some parents are  currently doing , at a point my choice of football was about to cause division in our house , my mum was against my choice while my Dad supported me.”

“Because of the division my choice of football have caused family, I thought within my self that I have to satisfy my parents by not  allowing my football career to disturb my education, because my mum wants me to go to school .

I have diploma in sports science in Federal University Technology and I am hoping to further my education to please my mum.

There are lots of former Nigeria footballers  who are graduates , the likes of Vincent Enyeama, Seyi Olofinjana are graduates.

“I am not happy because my dream and vision has not yet been actualised , I’m still working hard to make my dream come through, I build my confidence through self motivation because I love what I’m doing .”

Nelson added that Zinadine Zidane and Thiery Henry were the footballers that motivate him most , but I chose Marcelo Vieira as my role model because of his attacking prowess while my favourite football team is Manchester united.

“I have been playing active football in the last fourteen years, I played for Rising Stars in 2015, Moyero FC Owo in 2017.”

“I love football to the extent that I can never  trade football for any other sports because I see it has the best sports, it gives me joy.”

According to the little Messi as he is fondly called by his admirers , “I only train on weekdays, during my off field training I try to improve my skills in web design”.

“The  best football moment I will never forget was when I scored a spectacular goal in a crucial match that qualified my team for the next round of the competition.

“My goal is to become a world football star, but sometimes things might not go the way you planned it,  I will continue to strive hard to achieve my goal of becoming football star , like Lionel Messi, Christian Ronaldo and other successful players” .

He therefore advised the younger ones out there to put God first in everything they are doing, adding that they should be determined, humble and be hardworking.