I have performed in 30 states –Ajokebe 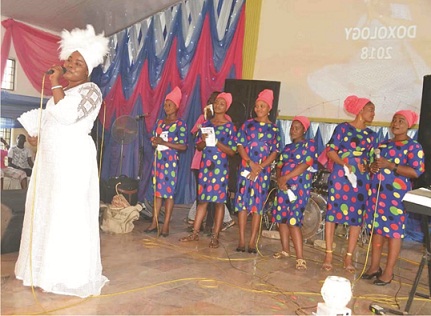 By Bamidele Kolawole
|
An Akure-based gospel artiste, Evangelist Mary Ajokebe, has revealed that she has been to 30 states in Nigeria since she has been singing professionally.

She said this while speaking with Friday Extravaganza, on the sideline of her annual music programme tagged “Doxology”, with the theme, “King of Glory” which also marks her fifth year anniversary on stage, and the launching of her second album titled “Akirisore”, at the weekend.

The artiste, who have been singing for five years said that she started her music career as a choir  where she developed her gift.

The graduate of Health Education from the Adekunle Ajasin university, Akungba Akoko, said that her experience since she has been singing has been difficult because of lack of fund, but according to her, through God’s help,  she had released two albums within five years.

Ajokebe, gave thanks to Almighty God, who made the day a reality for her, and to everybody that came, and prayed to God that the blessings of God will be for them all.

Her words: “If mercy speaks, all protocols will keep quite, it was mercy that settled my case, that allowed me to sit and eat with kings among my equal.

“I have been singing since when I was young, even when we were still a Muslim, but I did not take it serious.

“God perfected everything when I got married because I married to my destiny helper.

“I don’t know anything about Christ before, but immediately I accepted Jesus as my saviour, and heard the word of God, the ‘spirit of music’ began to grow in me.

“I discovered my talent when a brother called me and told me to take this music as a profession, but I told him that, I was not called.

“He made me to understand that God had called everyone to go to the world and preach the gospel.

“I joined choir in my church, I use to compose a lot of songs and teach them, and that brought me to where I am today.”

Among those who attended the programme is Prophetess Abosede Mayowa, the founder of CAC Oke Iselogomi, Akure, who described Ajokebe as a woman of God who sings undiluted gospel music.