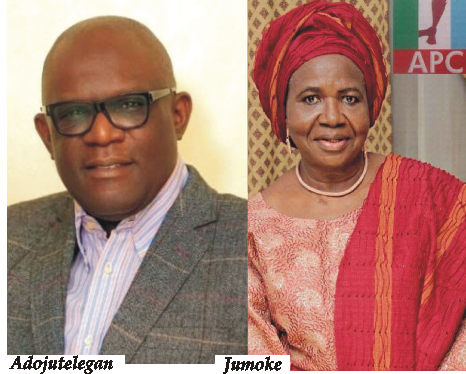 One of the two governorship aspirants of the All Progressives Congress, APC, in the 2020 governorship election in Ondo State who was expelled for anti-party activities has threatened to challenge the party over her expulsion in court.
The expelled state leaders of the party are Mrs. Jumoke Anifowose-Ajasin and Mr. Nathaniel Adojutelegan.
Anifowose-Ajasin, in an interview with The Hope said she would take legal action against the party vowing to approach another court that will see to the case.
While reacting to the expulsion, Anifowose-Ajasin described it as laughable stressing that the party at the national level will still decide who should be expelled
The party had announced the expulsion of the duo, while addressing journalists in Akure, the State capital though its State Publicity Secretary, Mr. Alex Kalejaiye last Friday.
According to him, the suspension of the duo followed deliberation of the State Working Committee on fact-finding committee, it set up on series of complaints and anti-party activities allegations against them by leaders of the APC in lgboroko 1, ward 2, Owo and Arigidi lye ward 1, Akoko Northwest Local Government areas of the state.
He said “sometime in January, leaders of APC in Igboroko 1, Ward 2, Owo Local Government area outlined some anti-party allegations against one of its leaders, and indeed a state leader, Chief (Mrs) Jumoke Anifowose-Ajasin. The Ward suspended Mrs. Anifowose, after investigation, expectedly, and communicated the decision to the Local Government secretariat.
“On receipt of the letter of suspension, the leadership of the Local Government did thorough checks on the actions and decision of the Ward and was convinced of the propriety of the decision, endorsed the suspension of Mrs. Anifowose, and did communicate the development to the State Secretariat.
“We also received series of complaints and anti-party activities allegations against Mr. Nathaniel Adojutelegan from the leaders in Arigidi Iye Ward 1, Akoko North West Local Government, and that he has been suspended.
“As a lawful and responsible organisation, the State Working Committee deliberated on the allegations, and set up a fact-finding committee, in line with Article 21 of the Party, to dig into series of allegations against Mrs. Anifowose, and Mr. Nathaniel Adojutelegan.
At the party’s State Executive Committee on June 3, 2021, and on the strength of the report of the disciplinary committee early set up, the State party resolved that Mrs. Jumoke Anifowose-Ajasin, and Mr. Nathaniel Adojutelegan, be suspended and expelled forthwith from the chapter and the resolution was communicated to the National Secretariat.