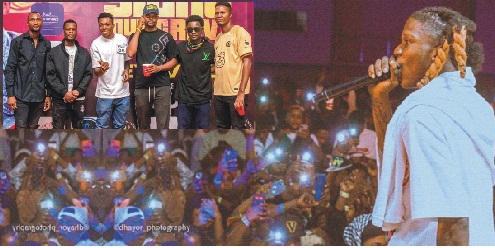 OKEYSIGNO who disclosed this at The International Culture and Event centre ‘The Dome’ said the concert attracted lovers of hip-hop songs from all walks of life.

Okeysigno also enjoined artistes, especially musicians, to use songs as a tool to preach against violence and the need to elect credible candidates for the betterment of the nation as the forthcoming 2023 general elections draw nearer.

Commenting on the show; “It was a brilliant night of glitz and inspiration as artistes from all walks of life stormed “The Dome”, to showcase their talents and thrill the elated audience to memorable and evergreen melodies.

Asked what inspired him to stage the concert, OKEYSlGNO said “I noticed that our upcoming artistes do not have a good platform to showcase their talents, so we took it upon ourselves at Signo Limited to bring the best out of our young artistes in Ondo State.

“Our plan is to push the upcoming artistes to the world by identifying platforms on which they can showcase their talent.

He rated the Nigerian entertainment industry high in terms of performance, saying its doing pretty well with the big names such as; Sheyi vibes, Wizkid, Davido and numerous others whom he said are making waves and competing with other famous artistes around the world.

“More importantly, they are also inspiring the youths through their God-given talents. Our industry is not lagging behind”, he said.

He admonished the upcoming artistes to remain steadfast, be prayerful, believe in their talents, shun drugs and assured them, that “light usually comes at the end of every tunnel.

“Keep doing what you do best and you will hit stardom like your role models”, he advised.

He urged his fans to continue to support him, saying without their supports, it will be difficult to grow in all ramifications.

On his own, a member of the group, Sule Rotimi; “l felt fulfilled to be at a gathering like this. It’s good that people should embrace such gathering because it’s festive season. From January to December, I felt we need to relax and  have some fun with our family members and friends.

He expressed delight, saying the event which was a platform to harness young talents would further encourage upcoming artistes to pursue their dreams with the hope for a better future.

DJ Rozay and DJ DRE electrified the crowd with hit songs by Kiss Daniel, Burna boy, WizKid, Asake which  had the crowd screaming with ecstacy.