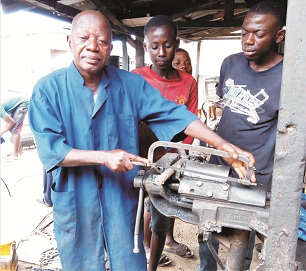 By Agboola Fesobi
|
A 70-year-old man from Igara in Akoko Edo local government area of Edo State, Chief Kayode Awe, is a blacksmith of 48 years experience. He also does welding work, without learning it.

He was born in Akure to farm labourer parents but was taken back to his home town for his primary education, where he obtained primary six leaving certificate.

But his parents could not afford to send him further in his education because of financial incapability.

He said that his father instructed him to train as a blacksmith with his uncle in Akure where he spent seven years before he completed his apprenticeship.

As a result of his poor background, during his apprenticeship, he was compelled to be a farm labourer, added to other menial jobs in order to raise enough money for his“freedom.”

Even afterwards, it was a struggle for him to get on his feet.

His words:”When I asked my parents to provide me my tools of work after my ‘freedom’, they could not afford it. Then I got involved once again in farm labour to raise the money.”

He explained that he also worked as a cart pusher, moving from street to street to make more money to buy his tools of work. He also washed dishes at a local restaurant.

“While I was being trained as a blacksmith, there was a police recruitment exercise for artisans like carpenters, blacksmiths, shoemakers and welders. I applied and was given the job, waiting to be called for the Police training in Lagos.

“But my father compelled me not to go for the police job, instructing me to continue my training as a blacksmith. According to my father salary job is not for me, and I obeyed him wholeheartedly. Some of my colleagues who applied for the police job as shoemakers, surveyors, mechanics have all retired while some are still in service.

“But after I had bought all my tools from the money I had saved, I needed a N200 worth electric meter to start the job proper.

“My father, who insisted on the blacksmith job, nevertheless prayed for me and said that as time goes on an helper will locate me.Then I went to my landlord to borrow me N200 and he did.

“When I began the work, ABICO Company started building the present Ondo state government secretariat. They gave me jobs to do and I was able to save N200 to repay my landlord. But he did not collect it from me. That made me burst into tears of joy and unbelief, remembering all I have suffered to get to where I was then.

“After that, I became so popular in town and God was helping me. In fact, it is not only blacksmithing that I do. God gave me the wisdom in other areas like welding, and the ability to fix things, so much so that people come from Uso, Idanre, Owo, Ijare and Ogbese with their motorcycles and bicycles for me to repair, having not learnt such things from anyone, but I discovered I was able to do it and I was becoming very successful.

“I repair radiator, do welding and a little mechanic work. God blessed me and apprentices began to troop in to learn.

“In fact, there was a time I had up to 37 apprentices and so far I have trained over 50 who are doing well in their various workshops. Presently, in my workshop, I have 15 apprentices.

“All of my boys have made a success of the job. This is a thing of joy to me.

“You may see a carpenter, or a tailor with five apprentices. But most of the time, only one or two of them will graduate. But my case is different as all my apprentices always do their ‘freedom’ because I used to pray for them from the bottom of my heart.

“At the end of every year, virtually all the boys that have learnt from me bring me gifts and food items and those that cannot come send money to my account.

“And I remember what my father told me many years ago that I will succeed in the job and it is now happening.”

He said that some of his colleagues who are still in the police force would come to him that they have not been able to build a house throughout their years of service.

“Initially when I started I rented a shop but presently I now have my own four bedroom flat building that I bought for N600,000 many years ago.”

Concerning the challenges he had faced on the job, he said, “I don’t really have much challenges on the job except something terrible that happened in my old shop. I went out and came back to discover that the petrol tank of a car had exploded and injured two of my boys and they had to stay in the hospital for two months. Exactly one year later, one of my customer’s car got burnt to ashes. But he did not demand any reparation.

“I served for eight years as zonal chairman Akure chapter of Blacksmiths and Welding Association of Nigeria. Now I am an ex-officio and enjoying the privilege of not paying monthly dues again because of my old age.

“I have two wives and many children and I thank God that I have built houses in my home town, Igara and in Akure and I have trained all my children educationally. Three of my children are graduates; one is a soldier. All my children know the work, even the females. When they come around, they join me in the workshop.

“I can categorically confirm that there is money in the job, if not people won’t be coming to be trained in it. It has good prospect.

“In my 48 years experience, I have worked with notable persons in Akure like Chief Olukayode, even late Chief Adebayo Adefarati, the former governor of Ondo state before he became governor. when their cars had faults like the radiator, they bring them to me for repairs.

“I don’t pray that my enemies suffer the way I did earlier in my life, and I will advise our youths to be up and doing rather than resort to stealing or ‘yahoo’ business, as it pays to work and not be idle, he concluded.