I saw death with my eyes, fire victim recounts 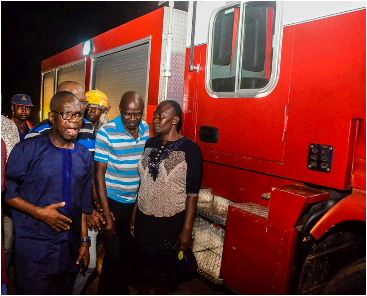 By Chris Chimezie, Evelyn Omotoye & Adekola Afolabi
|
I saw death with my naked eyes, a witness to Wednesday’s tanker inferno has revealed.

The witness, Saheed Lawal said he thought the dreaded doomsday has come.

Lawal who recounted the scenario exclusively to The Hope said the tanker loaded with 33,000 litres of diesel veered off trying to avoid a head on collision with an oncoming Corolla car whose driver was on phone.

In a desperate attempt to avoid the collision, Lawal said the tanker fell on another car and immediately burst into explosion killing the four occupants of the car.

Among the victims were a trader identified as Mummy Oyin, her two children and a cook.

The fire outbreak which happened around 7pm on Wednesday also burnt six other vehicles beyond recognition and destroyed other property including a flat and three shops, as residents of the affected area scampered for safety to avoid being burnt.

Some were also said to have sustained varying degrees of injury during the tanker inferno.

While giving an account of how the incident occurred during an interview with The Hope, Lawal explained that he followed the car on which the tanker fell, saying that he saw death face to face because he thought he would lose his life to the incident.

According to him, commercial motorcyclists at the Shagari junction contributed mainly to the accident as he said they were rushing to cross the road while the tanker driver who was coming from Ilesha axis was trying not to crush them.

“Immediately, I stopped and jumped out of my car and ran for my life. Initially, I thought I would not be able to make it, but God saved me. After like three minutes when I discovered that the fire was not burning in the direction of my car, I rushed back to my car and I reversed and ran away. All the people in the Primera burnt. They were about six.

Fire fighters from Akure Airport and the Ondo State Fire Service, officials of the Nigeria Security and Civil Defence Corps, the Nigeria Police Force, Federal Road Safety Corps among others had an hectic time putting the situation under control

The husband of the deceased, a military officer, who later visited the scene of the incident yesterday (Thursday), betrayed emotion when he saw the remains of his family members who were burnt beyond recognition in the vehicle. He could not speak with The Hope. Three men held him and led him out of the scene

The Police Public Relations Officer in the state, Mr Femi Joseph, confirmed to The Hope that four occupants of a car who were directly involved and one motorcycle got burnt while three shops were also razed down by the conflagration caused by the diesel tanker.

Joseph, who added that normalcy has since returned to the affected area, however, appealed to both private and commercial vehicle owners to always consider other road users while plying the roads.

He noted that the police have commenced an investigation on the incident which he described as very shocking and unfortunate.

Meanwhile, the Ondo state Deputy Governor, Hon. Agboola Ajayi, has commiserated with the families of those who lost their lives and other valuables to the fuel tanker explosion.

The deputy governor who led other top government officials including the Chief of Staff to the Governor, Chief Olugbenga Ale and the State Commissioner for Works and Infrastructure, Rt.Hon. Taofiq Abdulsalam to the scene of the inferno, described the incident as very unfortunate and sad.

Ajayi arrived at the tragic scene at exactly 8.32pm and commended the emergency responders for their quick response, which according to him, prevented the fuel tanker from causing more havoc in the area.

He specially lauded the officials of the Nigeria Security and Civil Defence Corps, the Nigeria Police Force, Federal Road Safety Corps and workers of the state Ministry of Works and Infrastructure who were at the scene to save the situation.

The deputy governor equally directed relevant government agencies to ensure the immediate evacuation of all the burnt vehicles from the road to open it up for traffic.

He assured the people that the government will put measures in place to forestall a  future occurrence.