I sing for profit 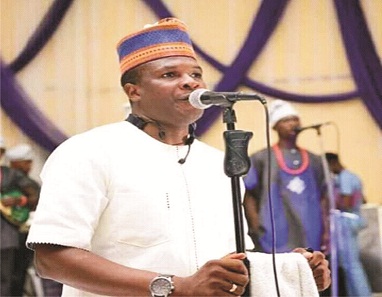 By Kolawole Bamidele
|
Music is a therapy on its own which heals illnesses, and it was an awesome performance when popular Gospel  musician, Muyiwa Famuyide led other gospel artistes and the congregation to offer praises  to God at a mega concert last Sunday.

According to him, God’s advantage is basically on the spiritual aspect of music and Jijo Ariya is based on entertainment.

The concert was held at the Adegbemile Hall, Akure and attended by eminent people in the society.

During the programme, the hall was filled to capacity while people from all walks of  life danced when Famuyide sang as their spirits were lifted.

Famuyide, while speaking with Friday Extravaganza, said that his passion for music has afforded him the opportunity to do exploit.

He stated that he held the concert to appreciate God for what he has done in his life, and to thank God because he has been able to showcase his talent among his equals.

He disclosed his plans to organise about three to four concerts this year.

He noted that during the last concert, he spent up to 1.3million naira while expressing hope that he  can do more in his life.

He noted that man cannot succeed in his affairs, until his source which is divine is acknowledged.

Famuyide stated that this year has been declared as a year of favour and salvation.

He urged people to learn how to be consistent in whatever they do in life, saying diligence and discipline are the keys to success.

Among those that graced the occasion are Pastor Mrs Odunayo Ketiku who said that it is not possible for people to praise God and for God not to be there except if it is not done with the spirit.

She noted that music brings the hand of  the Lord down whenever they praise Him.

In her words,  “God will do marvelous things in the concert and if men know how to praise him, the blessings would be for them all.”