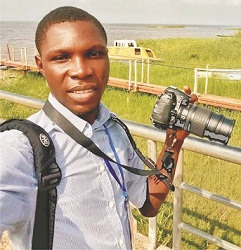 Master Adesola Ikulajolu is a 300 level student of the Department of Mass Communication at the Adekunle Ajasin University, Akungba-Akoko (AAUA).  In this interview with Education News, the Campus Journalist speaks on his passion for journalism and how he combines journalism with his studies among the other sundry issues.

Can we meet you?

Can you tell us your background?

I hail from Ilaje Local Government area of Ondo State. I had my primary school education  at St. Judes Primary School in Atijere before I later moved to Biso Craddle school in Akure, and later graduated from Life Nursery and Primary School in Ile-Ife, Osun State.

I later went to Ijapo High School, Akure later to Distinct Medal College in Lagos before moving to Assfod International College where I graduated. All these were due to relocation of my parents from one area to the other.

I grew up with so much trainings that never gave me the opportunity to waste any of my time. I started taking up responsibilities while I was a little boy.

As a campus journalist, how does that journey begin?

My journey began a long time ago while I was in secondary school. I love reading newspapers back then because I stayed glued reading Punch newspaper. My uncle would also buy newspaper everytime, so I ended up falling in love with the cartoons, but later loved the stories and articles. I used to be a very good writer in my secondary school because all essays and competitions will surely involve me. My juniors will always bring essays to me to write for them or edit.

Later on, while I got admitted into Abraham Adesanya Polytechnic, Ijebu-Igbo, my friends and I had to start a reporting group in the Mass Communication Department. We had no resources or equipment, but we never stopped, we wrote with pen and pasted on all notice boards round the school.

As at that time, my interest in journalism had grown beyond control, no information would pass me. At a point, I became the source of any information, because everyone wanted to confirm from me before believing it.

My lecturers, Mr. Aro Adebisi and Emmanuel Osideko made it compulsory that all Mass Communication students should start publishing “Letters to the Editor”. As much as I write and edit for others, my letters never got published. Some of my friends had about three bylines already while I had none. We were the first set of Mass Communication students in the school, so everyday, about five of our students will have their letters published. The idea was bringing fame to the school, even the Rector was appreciating it.

What raised my curiosity and love was that for every letter written, attention was always given to that subject matter. From then, I saw Journalism as a profession that serves as mouthpiece to the voiceless.

My first Letter to the editor got published on January 5, 2015, it focused on the Centenary celebration and why the government should attend to other burning issues.

At this point, I had loved journalism so much. I started seeking ways to improve myself. I learnt on the job. One of my worst period was when I was sent out of a press conference at the Rector’s office and later asked to come in(story for another day), I wondered why I was the one asked to go out of eleven of us.

Later on, I was attached to every event of the Rector and she was always expecting me at events since I became a familiar face.

I was among the first set of reporters that started the AAPOLY News Magazine.  My friends and I wrote all the stories and did the production in 2014 to 2015- it was the first of its kind in AAPOLY.

After graduation, I got the chance of working with Breezereporters.com (formerly Ketu Breeze Newspaper). I was recommended by one of my secondary school juniors, Obasuke Eniola after three years of graduation.

That was how my interest kept growing.

What inspired  you as a campus journalist?

Being a campus journalist may not be easy, but with God, it is the most life-helping profession I can ever opt for. My inspiration comes from the needs of the people. I can’t afford to see people in need, I can’t  withstand it. This is why I love writing stories that will provoke actions. Also, my mum had always told me to help people with any position I find myself, so that also kept me on track to never give up.

What are your major challenges?

Challenges are inevitable, in fact, I face more of it than expected. People see me as a successful student journalist and potential veteran journalist, but I had worked with limited resources, equipment and gadgets most of my life. I was doing journalism at a point, I had no good phone. I had no laptop, but I have to keep the stories rolling in.

There is no excuse for any failure. With my poor phone, I managed to put words together and wrote award-winning news stories. These were challenges I had to battle with because I knew how my other fellow friends on the field were doing good with adequate gadgets and resources,  but I can’t just let that stop me.

Some of my best stories nominated for awards were written on my bad-looking phone, until recently when I changed it.  Fear can also be a challenge especially when it has to do with authorities.

Even till now, I don’t have a laptop but I kept on writing. Someday, I will be able to work efficiently more than I do now.

Can you tell us some of your achievements

When it comes to achievements, they are still growing and can’t count them for now, but nevertheless, I will tell you some of the interesting ones I’m happy about.

In 2019, I won Campus Journalist of the year by Prestige Anchor Leadership, Empowerment Capacity; Same early 2019, I was among the Top 30 Finalists at the Campus Journalism  Awards in Africa organised by Youth Digest in Abuja.

I was also the brain behind Campus Journalism Hub that engaged about 150 students including upcoming campus journalists in AAUA. I have also worked with several veteran journalists as well as principal officers of the University. I have written stories that compelled and instigated actions that led to change.

In 2018, I was appointed Special Assistant on Media and Publicity to the 2019 Presidential Candidate of Alliance for Democracy, Prince Eniola Ojajuni. I have contributed my quota to the growth of the society.

Let me also add that during my tenure as AG. Editor-in-Chief of Echo Media Newspaper, I revived the production of the newspaper and also the weekly bulletin. I was so passionate about Campus Journalism.

How do you use your talent in achieving your set goals?

Some things are simple in life except people don’t understand. Talents and goals are supposed to go together.

It has not been easy, but the two compliments each other. Being a writer can be tasking, engaging and demanding, but my goal also is to liberate people with my writing. So, the two must go together. One should not lag behind.

You write for different news media as student, how do you manage the two roles?

This is such a technical question but if I am to answer it, I will tell you that I blend into every activity. One thing I’m conscious about is never to be outdated or behind others and that is why I try my possible best not to miss any information.

I write for Newspapers, I write for online platforms  and I also report for radio stations. All these are quite easy because I put in same energy in reporting for them, they also want a good report.

All my other activities as a student are tailored towards developing myself academically when I discovered that I can only learn few things in the four walls of the school. I wanted to know beyond the school, the outside world is a big reality and that is why I started adapting myself to what it would be like when I graduate.

I concentrate on my studies, but only my close friends can tell that I don’t struggle to read. Even during examinations, I am not the brilliant type, but when I get to the hall, I deal with the business. There are several examinations I have written that I did not prepare for, but I came out with outstanding results. This is because my activities are to help me academically and also expose me to what I should be able to do.

I can’t say others should follow these steps because we are all different and our process of reading and excelling is different. What works for me might not work for another person.

I’m training my mind towards the things to come in future after school, maybe that’s what made me distinct from other students. Nevertheless, every student should have his studies and come out with outstanding results.

As a campus journalist, who are your mentors?

Thank God you said mentors because they are numerous. It could be shocking that I have never met some of these people before, but I read, communicate and learn from them. I don’t have a particular order because they are all essential to my growing stage in life.

All the good, truthful and dedicated journalists are my mentors. I do well to connect and get tips on how I can grow from them.

What’s your advice to every campus journalist out there

My advice is simple, be consistent and passionate. No one can excel without these attributes. You have to make things happen for yourself, no one will help you if you don’t help yourself. There are opportunities out there, go for them, don’t wait for someone to push you to do it. Develop a good intuition without delaying to do things, don’t be too rigid open your mind to trainings and corrections.

As a Campus journalist, you should learn the habit of reading, read other people’s works. Show respect, make contacts and don’t be proud.