I will retrieve my mandate -Tunji Abayomi 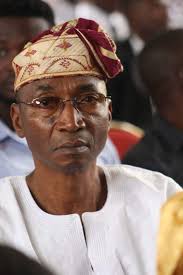 By Mary Agidi
|
An All Progressives Congress ( APC)  chieftain in Ondo state and aspirant for Ondo North Senatorial district for 2019 elections, Dr. Tunji Abayomi has vowed to retrieve his mandate.

Abayomi who made this known during a press conference in Akure called on the leadership of the party to declare him the winner of the primary election for Ondo North Senatorial district in conformity with the constitution of Nigeria and that of APC.

In his press statement titled “Whose Right Is it?”, he noted that the constitution of the party forbids automatic ticket, and therefore called on the National Chairman of the Party, Adams Oshiomhole to diligently comply with the APC constitution.

” Chairman Adams Oshiomhole and his NWC have blocked my right to political participation as a winning candidate.

“They have insulted the integrity, honour, and political rights of the people of Ondo North Senatorial Zone to elect their candidate.

“I will not relent in demanding immediate remedy that conforms with the constitution of Nigeria and that of APC. That remedy is that I must be declared the winning candidate because I won the primary election conducted for Senatorial candidate by the party members” he said.

Abayomi, who said he is in serious pain over the stolen mandate, said he was not aware of being screened out of the contest as claimed by the national leadership of the party, hence, the reason he didn’t press forward to challenge the screening.

“On October 6, 2018, I participated in the APC primary with other Senatorial aspirants and  won and was declared winner by the Party in the Senatorial Zone.

“It is therefore strange that my brother Senator Ajayi Borofice, who did not win in the APC primary will wrongly, improperly, unlawfully, unjustly and unconstitutionally be declared a candidate for the Ondo North Senatorial Zone by Comrade Adams Oshiomhole.

“I found it also disappointing that Senator Borofice would accept an unjustly and unfair victory,” he lamented.

He described Oshiomhole’s administration as a reign of error for disrespecting the constitution of the party, saying that is why there are crises everywhere in the party.

He, therefore, assured that he will run for the Senatorial seat in the forthcoming general elections in any available platform, adding that his final decision will be made known before November 17 when INEC will paste the candidates’ list.