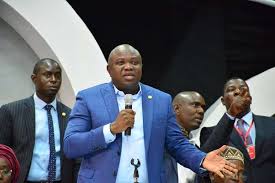 From Samuel Alonge, Lagos
|
Allaying a common fear that ongoing capital projects under Governor Akinwumi Ambode will be discontinued once he gets to power, the governorship candidate of the All Progressives Congress (APC) in Lagos State, Mr. Babajide Sanwo-Olu, has said Lagosians need not worry.

According to Sanwo-Olu, all existing projects will be completed by his administration, if voted into power, but that all such projects will be reviewed to know those that need expansion or modification.

Speaking on behalf of Sanwo-Olu in a chat with The Hope, the media spokesman to the governorship candidate, Mr. Sesan Daini, said, “Of course, we will continue with existing projects and also initiate new ones as our desire is to put smiles on the faces of our people.

“There is nothing to fear about. Sanwo-Olu will not abandon the projects on ground, but all the projects will be reviewed to know if they have to be expanded, adjusted or modified.

“We are not asking for people’s votes for the purpose of witch-hunting anybody but solely to embark on developmental projects that will put smiles on the people’s faces.

“We know that Lagosians’ expectations are high and that is why we have come with a blueprint to transform Lagos. No project will be abandoned; and in fact, we are going to complete them and also initiate many other lofty projects,” Daini enthused.

He, however, noted that some philanthropists and other well wishers had indicated interest to assist in funding the Sanwo-Olu campaigns as well.

“We rely on millions of our members that voted for Sanwo-Olu during the primary election, to contribute their widow’s mite, no matter how little, to support this campaign, and we know that they will respond out of free will, to demonstrate their love for their candidate.

“Besides, some philanthropists and other well-wishers have come to support us in funding the campaigns,” he stressed.

Meanwhile, a leader of the Mandate Movement in Lagos, Hon Dipo Okeyomi, has said the group’s membership cuts across all political parties, being an indication that all Lagosians will be mobilised to troop out and vote for Sanwo-Olu.

The Mandate Movement was the APC in-house group that truncated Governor Ambode’s second term ambition during the primary election, bringing in his place, Sanwo-Olu.

“What some people don’t realise is that the Mandate Movement has an enlarged platform which is not limited to the APC.

“In that enlarged platform, we have members from other parties like PDP, Labour Party, APGA, ADC and the rest. We have all met and weighed all the candidates, and we have come to unanimous agreement that we must support Sanwo-Olu to be the next governor,” said Okeyomi.