‘I’d have died at war front’ 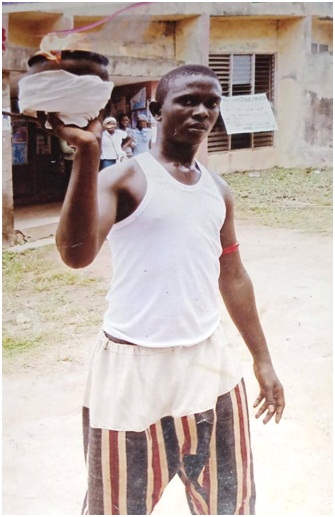 A theatre artiste, Mr Ibukunoluwa Obateru, said he had always wanted to become a soldier while growing up.
He added that he was grateful for where he is today since he was not sure he would be alive because of insecurity if he were to be in the military. “Thank God, who knows maybe I would have been at the war front facing the Boko haram in the far North East,” he said.
Obateru, who is the Secretary of Theatre Arts and Motion Pictures Practitioners Association of Nigeria (TAMPAN), Okitipupa Local Government branch, of Ondo state, told Friday Extravaganza that he never regretted joining the industry.
He however encouraged youths who have the passion for theatre to join the industry. ” I as a person, my kids must emulate me in this industry. It is a cool profession.”
Obateru also revealed the challenges he faced to achieve his goals as a cub in the industry. ” It has not been too easy considering the experiences I had during my school days. Talk about the suffering especially during night rehearsals, community theatre projects, just to mention a few and yet no motivation and support. Despite these, I still give glory to God for how far He has helped me.”
According to the young artiste, he joined a theatre group, IRAWO OWURO FILM PRODUCTION, before he proceeded to College of Education, Ikere Ekiti where he studied Theatre Arts / Yoruba some years back. However, his parents did not support him at the initial stage because they thought theatre was for anyone without a good background yet he was resolute.
While speaking on the challenges facing the industry, the Chief Executive Officer of IBUSCO Entertainment said the major challenge has been financial support.
He revealed that in order to become a known face in the movie Industry, one needed financial assistance to produce, but since people had not been supportive, it would be hard.
According to him “my first production, OBO (MONKEY), was limited due to finance. We are just striving to make ends meet even as I am looking up to Bolaji Amusan and Toyosi Adesanya as my role models.”
The Irele born artiste however used the medium to call on the state government to come to their rescue even from the local government as they were the preservers of cultural heritage.
Besides he advised the parents to help nurture whatever their children aspire to become. “To the parents, let us help in discovering the hidden talents in our wards and then encourage them. There is no profession that is not good, Bolaji Amusan aka Mr Latin, Odunlade Adekola, Funke Akindele, among others, If they had been discouraged, they will not be where they are today.”