If men keep their money, women their bodies, who ’ll beg first? 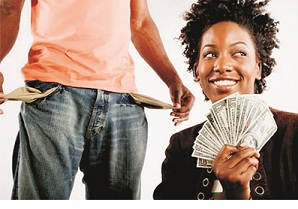 If men keep their money, women their bodies, who ’ll beg first?

By Nwosu Florence
|
Men unequivocally believe that women can do anything, just anything for money and such unruly belief has made them to view women as articles of trade and a set of people who are helpless on their own without a man.

The advent or rather the trending of sex toys at a point in time, particularly late last year gave most men another wrong impression that women can be easily discarded – after all, there’s a substitute for what they are naturally needed for, and this is a very big lie! This article is not somewhat centered on feminism, so do not think in that direction. As we go through this article together, I implore you to be rational and think outside the box.

If men keep their money and women their bodies, who’ll come begging the other? Today’s world has so evolved that humans are gradually being replaced by different machines and one begins to wonder where our world is headed to if such a practice continues and there’s every proof it will. Men naturally think women need them because of what they can offer – their money and that they don’t really need women because they wrongly believe women are only sexual objects and there’s always another way to take care of their sexual urge which includes but not limited to masturbation. In our today’s world, women are greatly involved in politics, industries, crafts and what have you. Gone are the days when a woman’s place is in the kitchen as many are working class ladies while others are tycoons, in order words, women don’t necessarily need money from any man to feel all right because they have been working for their money and can take care of themselves without involving any man but stereotype has made this otherwise.

In a bid to really ascertain the degree of this stereotypical madness, an interview was carried out in which some of the men posited that the men will beg first whereas few of them held on to the fact that the women will definitely come begging for their money, because, according to them, a woman can never have enough of anything, money especially; but is that really the case? The women however, debunked this belief adding that they are good enough on their own and can go for ages without a man, either for sexual affiliation and gratification or any material gain. Here are some of the excerpts from the interviews:

Mr. Adeleke Olawale, a businessman has this to say “Well, a woman is and will always be a woman, even if she has her own business or work; she cannot stop asking money from a man. It is in all of them. If we men decide to keep our money they will definitely beg for it because they cannot do without it. But the greater truth is that men will rot without women because they are really God’s blessing to mankind, sex apart but homes without wives and mothers are so lifeless”.

Dr. Sandra Olanusi working at State Specialist Hospital, Akure has this to say “What in this world will even make anyone to think that the men will not beg first? It is not because I’m female, of course not! But because that is the way it is. Come to think of it, how many men can stay off sex for so long? Statistics has it that just a few percentages of men can and that percentage is either severely sick or impotent. So, if men decide to keep their money and women their bodies, the men will definitely beg first”.

Speaking on this controversial issue, an anonymous who deals on electrical materials at Orita Obele Estate, Akure has this to say “The men will beg first because it can be frustrating to want it and not be able to. Sometimes a woman may not even need your money. Take for instance the relationship between a sugar mummy and a younger boy, definitely, it is not the boy that will give her money because for her to keep a younger boy she must have made her own money and doesn’t need a man dictating for her in any way. What I’m really saying in essence is that men will always beg first”

Mr. Peterson Agada, a fashion designer was of the opinion that  men will beg first owing to the fact that both men and women make money. His words: “I don’t understand! Who doesn’t make money? Even this question is stereotypical on its own. I personally don’t believe women enter relationships with any male because of money, if it were so, broke guys will not be dating any girl because in such cases, it is actually the lady that supports him financially, I have been there and I know how it feels and I also know that there are females out there that can never want a man’s money. So when a woman sticks with you, count yourself blessed because a lot of them can do much better without us or our money”.

Miss Amaram CY, an undergraduate posited thus “Some women may beg first anyways because whatever we do or decide not to do in life is a matter of the choices we make and every one of them is tied to our personality, but that some women might beg first doesn’t mean we women are not good enough on our own. We can go through a lot without anybody. Sad truth is we usually don’t need a man’s money always, it could be an emotional support that we desire such as knowing we can get something done but just want our spouses or partners to tell us they believe in us and that we can get them done and they wrongly interpret everything as ‘money’ because it is a woman, it got to be about money and that is super annoying. For me, I can’t beg, I can actually keep my body for eternity and most men will rot, call that wickedness, I don’t care. Some men don’t deserve our mercy”

To Mrs. Sunmisola Akindele, a trader at Oja market, Akure said that receiving money from one’s spouse is not as a result of lack of money on the side of the women. Her words: “the fact that we collect money from our spouses is really a way of spicing up the relationship and not because we cannot do well on our own”.

Men may not want to beg because of their ego but the truth is that they will be hurting inside. The problem of our world today is that wrong believe has caged each one of us just like religious bigotry has done more harm than good to the religious folks. What good will a man’s money do for a lady or a woman who has worked her ass off in years trying to fix herself and build her life to what she really wants? Not like there is more attached to the money from any man – it is the same currency, the same value and a woman already has hers, so she can do quite fine and all right without getting involved with any man who may not even be as industrious or adventurous as the said woman or lady. The truth is that these days, most females work more than men. Some take up two to three jobs – show me someone who’s got their hands tied to so many things that yield income and I will show you a female. The mother nature in every female gives them so much advantage and that aid them with the ability to weather a lot, so it will be an erroneous belief to think that a women can do anything, just anything for money.

“A female can decide to remain celibate for as long as she wants but can the same be said about a male? Definitely not, because such a decision will be quite tedious for a man who is naturally moved by what he sees. Be that a weakness or not, the truth is and remains that if women decide to keep their bodies, the men will definitely come begging for it even though the female may not need their money haven made a lot of her own.

“Personally, I repeatedly asked myself this same question ‘If men keep their money and women their bodies, who’ll beg first? everything actually point to the fact that men will beg first because as much as a woman can work her ass off to make a great living, a man cannot be satisfied with himself or any other thing that isn’t a woman, but should women capitalize on that and become absurd with the men? Hell no!”