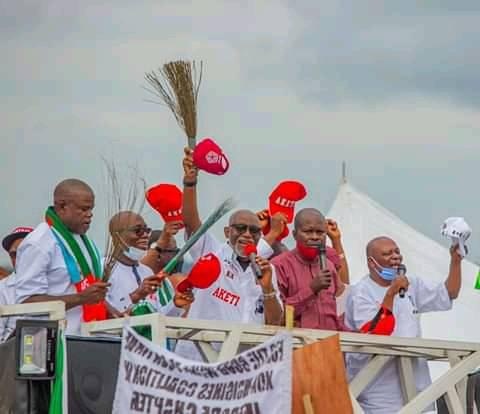 Royal fathers in Ifedore Local Government Area have applauded the state Governor and candidate of the APC in the October 10 governorship election in Ondo state, Oluwarotimi Akeredolu, for improving the social and economic situation in the area.
The traditional rulers under the chairmanship of Olowa of Igbara-Oke, Oba Adefarakanmi Agbede, particularly commended Governor Akeredolu for transforming the local government through construction of various roads and provision of other social amenities for the comfort of the people.
The monarchs who spoke while receiving Governor Akeredolu and his entourage at the Palace of Olowa, also unanimously resolved to work for the re-election of the Governor for a second term.
Speaking while receiving the Governor, Oba Adefarakanmi Agbede, lauded the Governor for construction various roads across Ifedore local government area including the Ibuji/Igbara-Oke road and several others, which he said have now prevented carnages and made lives more meaningful to the people in the affected areas.
The visit was in continuation of Governor Akeredolu’s local government by local government re-election campaign.
The campaign rally at Igbara-Oke, the headquarters of Ifedore Local Government Area, was attended by mammoth crowd of APC supporters.
Oba Agbede said the re-election of Governor Akeredolu is a done deal, just as he said the people must support continuity of good governance in the interest of the development of the state.
Also speaking, the Olubuji of Ibuji, Oba Folagbade Ojo, said they would work for the resounding victory of Governor because of his good works across the state.
Similarly, some leaders of the APC in the local government including the Speaker of the Ondo State House of Assembly, Bamidele Oleyelogun and former member of the Assembly Pius Adebusuyi, said the local government is fully prepared to return the Governor for another term because of his monumental achievements across the council.
The leaders explained that the impressive turn out of the people who welcomed the Governor and his entourage into the local government was an attestation to the fact that the local government is for Governor Akeredolu and APC.
Earlier, Governor Akeredolu who thanked the monarchs and other chiefs for their support, promised to complete all ongoing projects and do more in the council area.
He urged the people to troop out on election day and vote massively for APC to ensure continuity of good governance and over all development of the state.