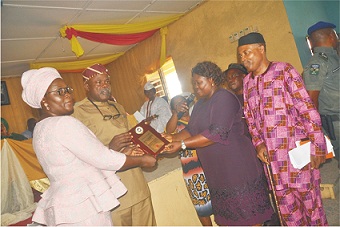 By Adekola Afolabi
|
It was a drum of support for the Speaker of the Ondo State House of Assembly, Rt. Hon. Bamidele Oleyelogun, last week at Igbara-Oke, the headquarters of Ifedore Local Government Area of the state, as the Speaker, under Oleyelogun International Foundation (OIF) gave palliatives and relief items to no fewer than 200 widows selected from the 10 wards of Ifedore council area.

The palliatives and relief materials presented to the beneficiaries included cash gifts, clothes (Atiku fabric) of five yards per person, milks, bournvita, foodstuffs, bathing and washing soaps, toiletries, among others. The donor and Speaker of the Ondo State House of Assembly, Rt. Hon. Bamidele Oleyelogun disclosed that the gesture was designed to make lives more meaningful to the beneficiaries who also included physically challenged.

The epoch-making event held at the Ifedore Local Government Secretariat, Igbara-Oke, further elicited more support for Oleyelogun  as traditional rulers, iyalojas, youth groups and various organisations including physically challenged, at the event endorsed Oleyelogun for another term in the Assembly, saying he has justified the confidence reposed in him.

Award of Excellence was also presented to the Speaker by the Federation of Ifedore Indigenes in the civil and public services, for his meritorious service in Ifedore local government. The Chairman of the federation,  Pastor Solomon Ariyeloye and other members also endorsed Oleyelogun for another term in the hallowed chambers.

Governor Oluwarotimi Akeredolu, SAN, while flagging off the presentation of relief items to the windows, specially commended the Speaker for his philanthropic gesture which he asserted would improve the lives of the beneficiaries.

Akeredolu who was represented by his deputy, Hon. Agboola Ajayi, explained that despite the fact that Oleyelogun was elected by his people to go and make laws in the hallowed chambers, he has taken another step further by giving back to his constituents through various empowerment programmes and philanthropic gestures, just as he described Oleyelogun as a good leader and representative of his people.

Speaking at the event, Rt.  Hon. Oleyelogun said the gesture was borne out of his determination to cater for the needs of widows in the local government area to ease their sufferings, explaining although the OIF selected 200 widows across the constituency, the total number of all the beneficiaries at the end of the program later rose to over 400.

Oleyelogun appealed to all well-meaning members of the society to rally support towards putting smiles on the faces of widows whose pains daily limit their attainment of wholesome joy, just as he called for advocacy aimed at lightening the burden that widowhood imposes on women in the society.

He particularly appreciated the governor, his deputy, traditional rulers, lawmakers, all the women and youth groups, associations and the entire people of the council area for their support which he stressed made the exercise a successful and fruitful one.

Highlight of the event was presentation of a ripe big pawpaw to the speaker by a 100-year-old widow, Mrs Morenike Oladimeji, who explained that the gift symbolised joy, happiness and peace.