Igogo Festival: When an Olowo must dance nine times in the market square 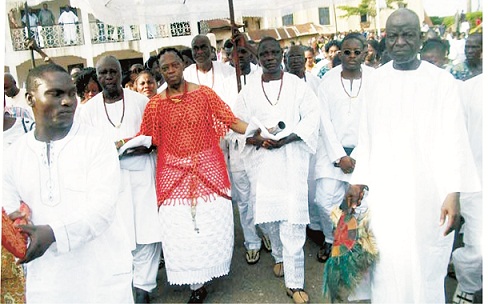 By Jimoh Ahmed
|
Taking the royal step, the Olowo of Owo, Oba David Victor Folagbade Olateru Olagbegi III was a sight to behold as he took the people aback by his dancing skills and dexterity at dancing despite his age.

At such an old age, Oba Olagbegi was simply fantastic and exhibited an unimaginable standard in the Owo traditional dance steps, although there was no drumming except for the clanging of metal gongs called agogo in local parlance, yet he satisfied the soul and curiosity of the crowd who had come from within, near and far to feed their eyes.

The royal father who adorned the traditional Igogo regalia made of ‘Ewu-Okun, a customized beaded attire made of woven cloth, replica of a woman’s blouse on a big skirt with four white feathers, Urere Oken attached to his plaited hair, stepped out of his palace into the waiting hands of the tumultuous crowd who were waiting impatiently at the palace grounds with broad smile ready to join the Olowo in a dance to the Oja Oba Market in company of his retinue of chiefs.

It was a case of wherever you go I will go with you as the joyous crowd followed the monarch to the market square where the Olowo was also received by the Akowa of Iloro and other Iloro chiefs who had come to join to join him to celebrate  the festival.

At the market square, Oba Olagbegi danced to and fro for nine times. Each time the monarch dances it was a different song and also showing more of the stuff in him as he takes better dance steps on each occasion.

At the end of the last dance, the kabiyesi headed back to the place.

It must however be emphasised that this was a clear departure from what used to obtain in the past where the Olowo dances round the town.

However, it was a spectacular event as the people were full of joy as they were shouting ‘Ologho baba o’, Orisha ma dunshologho, leeji wa gbo, wa to’ (Olowo you are great, May God never let any evil befall the Olowo, You will grow old and last on the throne).

Throughout the day the palace was in a festive mood as people, indigenes and non-indigenes alike all trooped out to have fun. Igogo as some will call it, is a festival of love, others say is a festival of unity while others call it festival of the maidens, but above all, it is a festival that serves a a unifying factory for the people of the ancient town.

During the festival, the people usually forget their differences and do away with individual leanings. Owo is always agog during the festival with old and young, males and females coming together as one and exchanging gifts.

Igogo is over 500 years old and started in 1601 AD during the reign of Olowo Renrengenjen.

However a big revelation came to the fore this year when The Hope sought to know there is any myth associated with the number of times the Olowo dances at the Market Square.

The Akowa of Iloro, Chief Adafen Okunrinsola disclosed that it is nothing fetish, but that each dance by the Olowo is meant for the monarch to pray for the town, its sons and daughters, all residents, Ondo State and Nigeria as a whole.

Although the 2018 edition of the annual Igogo festival has come and gone, but its frills and memories will continue to linger on.