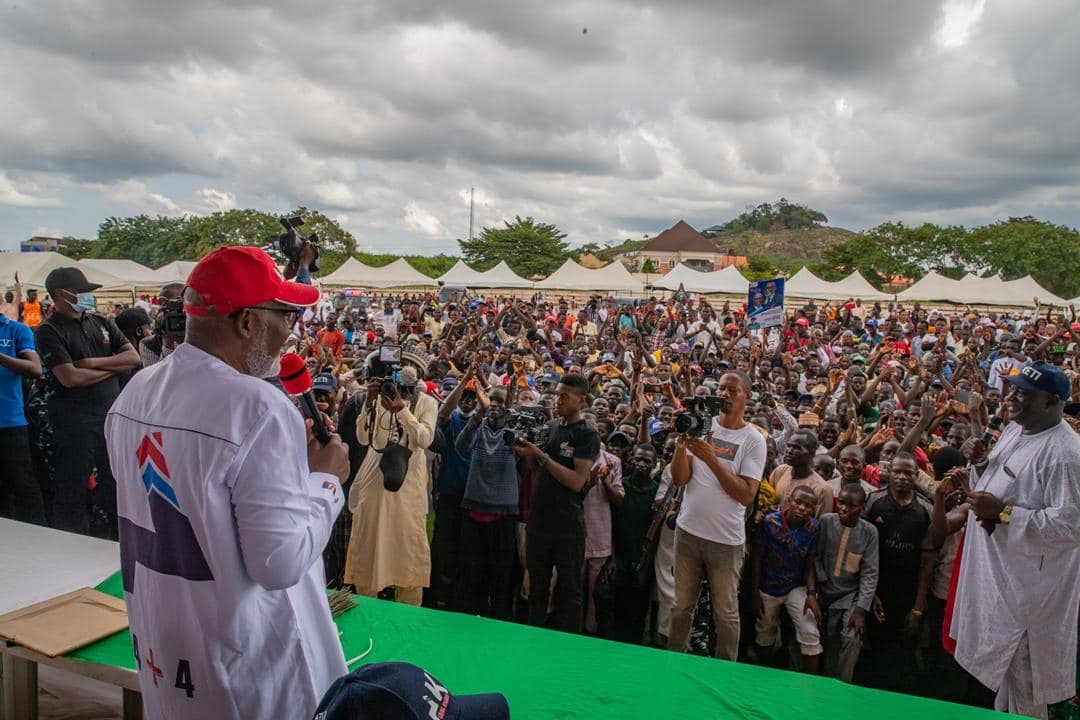 Iju community in Akure North Local Government Area of Ondo state on Sunday stood still as the campaign train of the candidate of the APC and Governor of Ondo state, Oluwarotimi Akeredolu, berthed in ancient community.
The people of the community trooped out with lots of enthusiasm and excitement to receive the governor and his entourage.
Speaking at the rally which was attended by party leaders in the local government, one of the leaders, Sen. Olorunnimbe Farukanmi, assured the governor of their readiness to support Governor re-election to.further ensure more development in local government.
He particularly thanked the governor for the renovation of public schools across the council area, adding that Governor Akeredolu led administration has brought lots of development to Ondo state in the past three and a half years.
Farukanmi lauded the governor’s achievements in all sectors including infrastructure, education, industrialization, among other people oriented projects designed to make lives more meaningful to the people.
Other leaders who spoke at rally including, Minster of State for NDDC, Senator Tayo Alasoadura and the Senior Special Assistant to the Governor on Mobilisation (Central) Otunba Dele Ologun, said voting Governor Akeredolu for another term would ensure continuity of good governance in the state.
Also, the APC state chairman, Ade Adetimehin, thanked the people of the community for always supporting APC, urging them to repeat same in the October 10 governorship election in the state.
Addressing the mammoth crowd, Governor Akeredolu informed them that the Akure/Ado-Ekiti dual carriage way has started and would be completed.
He appreciated the people their constant support, with a promise to executive more developmental projects if reelected for a second term.
The Governor and his entourage also paid homage to the Palace of Okiti of Iju, Oba Amos Farukanmi where he received royal blessings.
Similarly,.the Hausa/Arewa community in Ondo State yesterday pledged their total support for Governor Akeredolu’s second term bid.
The people led by their leaders across the 18 local government areas of the state and converged on Gani Fawehinmi Freedom Arcade, Akure, described Governor Akeredolu led administration as peaceful and non discriminatory.
The Chairman, Hausa/Arewa Community in the state, Alhaji Mohammed Shuaibu Lawal, said the Hausas have agreed to massively vote Governor Akeredolu because of his sterling performances and interventions in critical areas that affect their daily trades and businesses.
He particularly applauded the Governor for the construction of Oke-Alabojuto dual carriage way, Oke-Oka road, among others which he added had claimed several lives before the present government came in.
He further lauded the Governor for the construction of Ore flyover bridge (Redemption Bridge), saying the development has not only improved the socioeconomic development of the town but has put an end to incessant carnages along the axis.
In his remarks, Governor Akeredolu thanked the people for always being a pillar of support, assuring them that his administration would not discriminate against any tribe in the state but continue to give them the needed supports to contribute their quotas to the growth and development of the state.