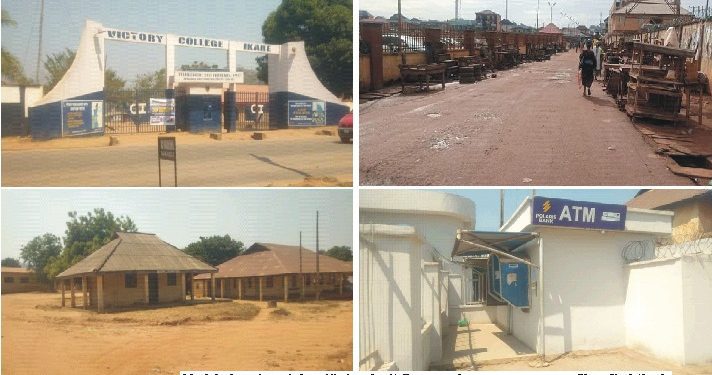 Residents of the crisis proned Ikare Akoko have now resorted to prayer for peace to return to the town as the 24-hour curfew imposed by the state government is taking serious tolls.

They also appealed to the State Government to consider the plights of the entire people of Akokoland, innocent citizens of Ikare, particularly school children, to relax the curfew or lift it totally.

They regretted that the communal clash that engulfed the town is having a reverberating effect on the entire Akokoland as the economy of the area is shut down.

Ikare is the unofficial commercial capital of the Akokos which makes other towns and communities in Akokoland economically dependent on the town for survival.

Speaking on the development, the Olubaka of Oka, Oba Yusuf Adebori Adeleye, stated that the curfew which has sealed Ikare has continued to take domino effects on the entire Akokoland as all towns and communities are economically dependent on the town.

Oba Adebori who described Ikare as the unofficial crowned commercial capital of Akoko posited that the latest development in the town has nearly shut down the economic life of the entire Akokoland.

According to him, business owners, commercial outlets and individuals find it, convenient and cost saving to go to Ikare to stock their business home than going to Akure, the state capital, which most often, result in high prices when transportation cost is added.

The monarch who said he has called muslims and christians to pray for peace to return to Ikare, appealed to the State Governor, Oluwarotimi Akeredolu, to consider the plights of the entire people of Akokoland, innocent citizens of Ikare, particularly school children, to relax the curfew or lift it totally.

In the same vein, a resident of Ikare Akoko, Mr Aladejana Dauda, said the curfew is taking a serious negative effects on the people of the town.

Equally, Aladejana said residents are now finding it hard to live a normal life as getting even food to eat is now a big problem.

According to him, the continued closure of markets and banks had made it difficult for people to transact businesses or withdraw cash to pay for their daily needs.

He disclosed that the closure of schools as a result of the curfew is also giving parents severe headaches as they are afraid their children and wards may not be able to meet up with academic activities or their counterparts in other communities.

Aladejana, therefore, appealed to the state government to lift the curfew so that residents of Ikare and other communities in Akoko which depends on Ikare for economic survival can do so.

Another Ikare Akoko resident, Alhaji Sule Olaniyi, appealed to the state government to have mercy on the people by relaxing the curfew so that the education of the pupils will not be jeopardised.

Olaniyi posited that Governor Akeredolu’s love for school children and education in the state which warranted him to pay for their WAEC fees and elongation of service years of teachers may be defeated if the 24 hour curfew continues without it being relaxed.

Jamiu said the continuation of the curfew which has prevented school children from resuming academic activities like their fellows from all other parts of the state, may hinder their academic progress if it is not lifted.

Meanwhile, banks in Ikare Akoko have remained closed while shops and commercial outlets have not also open for business since the curfew was imposed.

Reports showed that some residents are now going through harrowing experience as they now travel as far as Ekiti state and Owo in Ondo State for important banking transactions.