by The Editor
in Featured
0 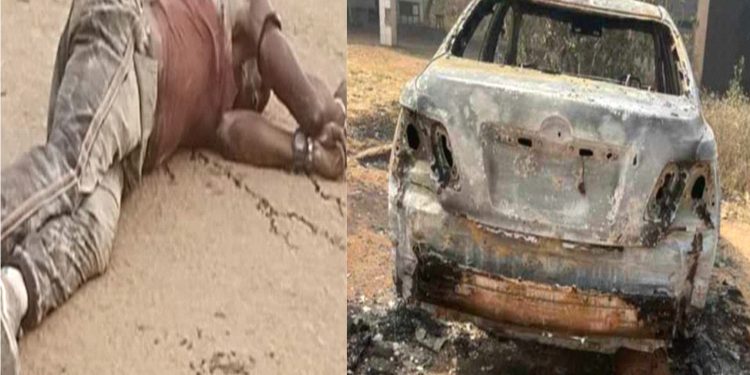 Violence has again erupted in Ikare, Headquarters of Akoko North-East Local Government area of Ondo State, leaving five people dead and many others injured, according to an unconfirmed source.

In a swift response, the state government yesterday wielded the big stick with a 24-hour curfew on the commercial town.

The latest violence is the third in nine months believed to be connected with supremacy battle between Olukare of Ikare and Owa Ale.

The curfew, according to a statement by Chief Press Secretary to the state Governor, Mr Richard Olatunde was decided at the State Security Council meeting chaired by the Governor, Arakunrin Oluwarotimi Akeredolu.

Subsequently, security agencies have been directed to ensure strict compliance with the order just as investigations are already on to unravel the real cause(s) of the violent clash.

“For emphasis, Ikare Akoko has been closed down for any unathorised human movement and activity until further notice,” the government order warned.

According to a source in the town, trouble started when a group of youths tried to hold the 2023 New Year Carnival at Okoja area of the community and this was opposed by some people, claiming the section of the town does not belong to the group holding the carnival.

Another source however blamed the mayhem on the supremacy battle between the Olukare of Ikare, Oba Akadiri Saliu Momoh IV and the Olokoja of Okoja, Chief Idowu Ogunye, who hinted that the bloody clash started when Chief Ogunye reportedly asked the youths not to organise the carnival in his area because another Chief in Okoja had organised the carnival.

According to the source, Ogunye insisted, saying he is the bonafide Olokoja, but the group holding the carnival said he could not stop them because he has long been dethroned as the Olokoja by rhe  Olukare for absenteeism, disloyalty and refusal to obey directive of the monarch.

Oba Akadiri Momoh had on January 20, 2021, relieved Ogunye of his appointment and cautioned him to stop parading himself as Olokoja of Okoja, but Ogunye, a loyalist of Owa-Ale through his lawyer, Femi Emodamori, insisted that he remained the Olokoja of Okoja and described his suspension and expulsion as illegal and strange to the tradition of Ikare Akoko.

Ogunye had stated that he was one of the kingmakers that participated in the selection of the new Owa-Ale of Ikare Akoko even though he had been purportedly suspended since 2018 by Oba Momoh.

Despite the peace meeting between the Owa Ale and the Olukare at the instance of the State Government, the clash continued unabated till yesterday, The Hope observed.

The development has forced the State Governor, Oluwarotimi Akeredolu to impose a 24-hour curfew on the town.

Meanwhile, the State Commissioner of Police, Oyeyemi Oyediran, has asked the two Monarchs in Ikare-Akoko in the Akoko North East Local Government Area of the State, to sheathe their sword.

The Police Chief, who visited Owa-Ale of Ikare, Oba Adeleke Adefemi Adegbite and the Olukare of Ikare, Oba Akadiri Momoh, on Thursday, decried the damage done by the indigenes to themselves.

He advised the monarchs to seek the intervention of relevant authorities and the government on issues bordering on boundaries.

“The monarchs appreciated the CP for his timely intervention and the neutrality of the Police in maintaining law and order.

“They both promised to talk to their people and maintain peace.”

The CP also appealed to the people of the state not to take laws into their hands or resort to self help but to channel their grievances to the appropriate quarters, report criminal cases to law enforcement agencies or seek redress in the court of law.

It will be recalled that on January3, 2023, youths of Okoja Quarters were celebrating their annual carnival. Trouble however started when another faction of youths from the same Okoja quarters, disrupted the activities of the Carnival leading to a clash between their supporters.

However, one suspect has been arrested in connection with the incident as men of the police Tactical Team have been deployed as reinforcement to the warring community.