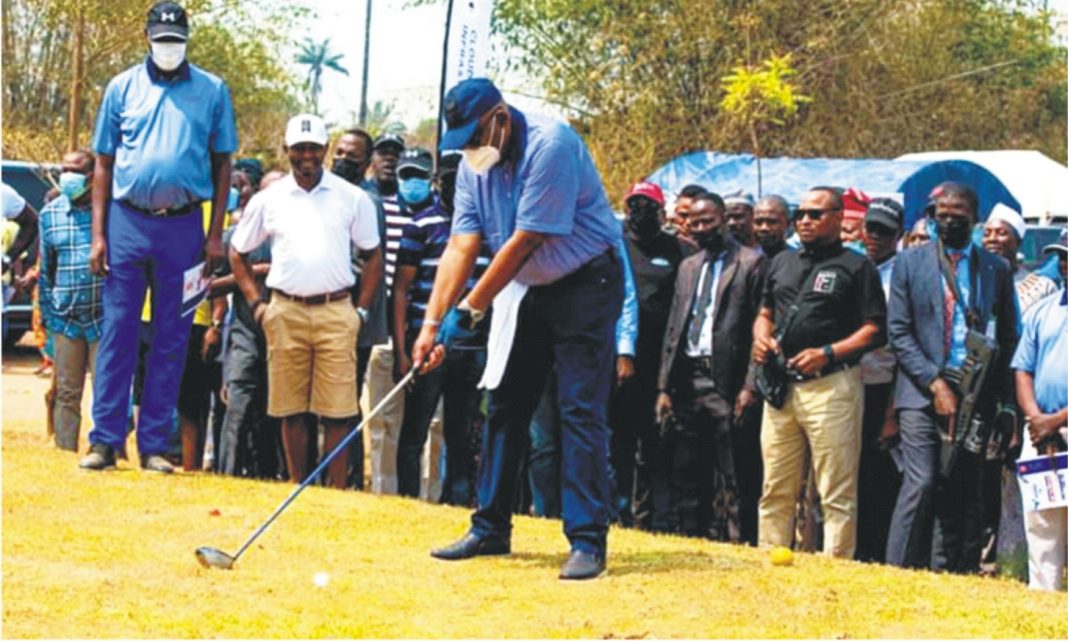 …as Governor tees off Crosscreek inaugural tournament in Ilado

The Governor of Ondo State, Oluwarotimi Akeredolu, has assured that the road linking the Crosscreek Golf Club, Ilado, Igbatoro road, would soon be constructed.

Akeredolu explained the move was to further ensure better access and improve the infrastructural development of the state, and Ilado in particular.

The Governor disclosed that the road has already been earmarked for construction as part of the Rural Access and Agricultural Marketing Project (RAAMP).

Akeredolu spoke at the weekend when he teed off the Deji Akinwalere Captain’s Inaugural Tournament at the Crosscreek Golf Course in Ilado community.

The governor who is also the Grand Patron of the Club equally performed the foundation laying of the Crosscreek Golf House.

He particularly commended the founder of the Golf Course, Sola Abidakun, for setting up the Golf Course in Ilado community, adding that the move would contribute to the state’s economy through sports development.

The Governor emphasized that the establishment of the Golf Course in Ilado has put the community and the state on the global map, adding it would provide job opportunities, youth employment and attract investors from within and outside the country.

The founder of Crosscreek Golf Course,  Sola Abidakun, said the construction of the Golf Course started four years ago with the sole aim of promoting inter-golf competition and complement the sports development drive of the present administration.

He appreciated Governor Akeredolu for the inauguration of the Captain’s tournament and the official opening of the Club.

Earlier, Captain of the Inaugural Tournament of Crosscreek Golf Course,  Deji Akinwalere, and his wife, Mrs Roseline Akinwalere, expressed happiness for the success of the event, saying about 153 golfers from within and outside the country graced the occasion.

The Olu of Ilado, Oba Kayode Ajomole, appreciated the various efforts of Governor Akeredolu towards ensuring the protection of lives and properties of the people.

Also present at the event were Speaker of the State House of Assembly, Bamidele Oleyelogun, represented by  Olugbenga Omole; members of the State Executive Council; political appointees; traditional rulers among others.