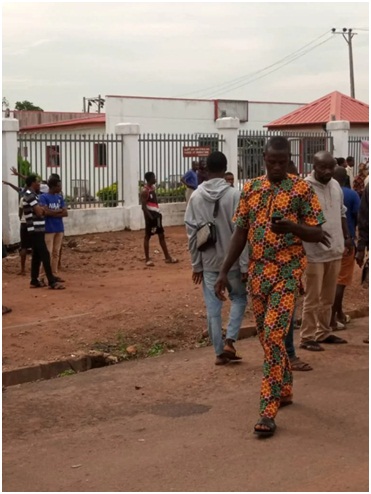 Some senior staffs of United Bank of Africa (UBA) branch at Ilara-Mokin have been quizzed by the Ondo State Police Command, following the bloody armed robbery attack on the bank in Ifedore local government area of Ondo State.
The Hope Metro learnt on Monday that some bank officials, including the branch Manager were invited by the police for questioning over the unfortunate incident that claimed three lives.
Our correspondent saw some of the bank’s officials at the State Criminal Investigation and Intelligence Department SCIID where they were being questioned on how the incident happened and possibly ascertain the amount carted away by the bandits.
As at the time of filing this report, it was not clear if some of them were detained. But sources said it was imperative for the Police to extend invitation to them as investigation into the matter progresses.
It will be recalled that some armed robbers numbering about 15 stormed the bank branch at Ilara-Mokin and killed three persons, including a seasoned broadcaster, Mr Olubumi Afuye, a policeman and motorcyclist in an operation that lasted for several hours unchallenged.
The state Police Commissioner, Mr Bolaji Salami, has set up a high team of investigators from SCIID to commence and unravel the cause of the incident and also mandated the team to bring perpetrators to justice in no distance time.
Aggrieved by the manner the robbery took place, the Governor of Ondo State Arakunrin Oluwarotimi Akeredolu gave matching order to all security agencies including Amotekun to as with a matter of urgency, fish out the perpetrators of the heinous crime and bring them to book.
The Governor who paid a condolence visit to the widow and children of the slain journalist, assured them that the government will do all it can to assist them, describing Olubumi Afuye’s death as a great loss to the state and broadcasting industry in Nigeria.
Also, the national and state leaderships of the Nigeria Union of Journalists have called on security agencies to fish out the killers of the victims of the robbery and tighten up security in banks to prevent further reoccurrence.
The remains of the broadcaster has been committed to mother earth amidst uncontrollable tears, encomiums and eulogies.