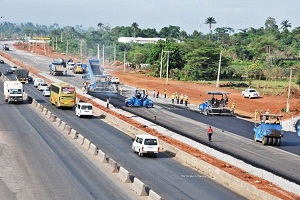 By Saheed Ibrahim
|
A lawmaker, representing Owo/Ose Federal Constituency in the House of Representatives,  Timehin Adelegbe has disclosed that Ilesa/Benin expressway would be dualized soon.

Adelegbe gave the  news at the maiden edition of a town hall meeting with the electorate at Mapo Hall, Owo.

Giving account of his stewardship at the green chamber in the last six months, Adelegbe said he had rallied and gained support of his colleagues from the state at the National Assembly for the dualization of Ilesa/Benin expressway.

Adelegbe further explained that the dualisation project will commence as soon as discussion on it was completed, adding that there were many other infrastructural projects to be executed by him in the next fiscal year throughout Owo/Ose federal constituency.

Some of the projects include construction of roads, building of eight town halls, rural electrification, information and telecommunication technology, water projects and skill acquisition programmes, among others.

Adelegbe, who is a member of House of Reps Committee on health, commended Arakunrin Akeredolu for the 100 bed hospital project currently on-going at Ifon, stating that two health centres would be constructed at Owajalaye and Segiri to complement the health facility, which will be highly beneficial to the constituents and the people in the state in general.

Speaking on the importance of the town hall meeting, Otunba Adelegbe said it is the social responsibility of any lawmaker to constantly brief those who elected them about the happenings at the national assembly with a view to retaining their confidence.

In their goodwill messages, the Olowo of Owo, Oba Ajibade Gbadegesin Ogunoye and the Oloba of Uso, Oba Adewale Adebiyi Olanipekun commended Hon. Adelegbe for involving community leaders in the planning & execution of his projects and called on the constituents in Owo/Ose federal constituency to support the Akeredolu-led administration in order to bring more dividends of democracy to the constituency and Ondo state.

Welcoming the participants, Ondo state Attorney-General & Commissioner for Justice,  Adekola Olawoye SAN called for more unity of purpose among community & opinion leaders in Ose and Owo for more meaningful development to take place in the area, assuring that the present administration in the state would not relent in its effort at investing in people’s oriented projects to improve the welfare of the people.