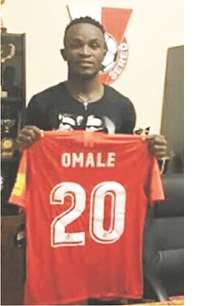 Nigerian rising sensational, Solomon Omale who was recently signed by Športový Klub Futbalu Sered has said he will feel accomplished wears the national jersey of Nigeria in the nearest future.

ŠKF Sered is a club that plays in the Slovak Super Liga, the highest football league in Slovakia.

Said, “I am working hard to earn that call-up someday. It’s not going to be easy, but with my move to my new club, I am going to up my game to warrant a call – up.

“I am eligible to play for the U-20 and even at a higher level, depending on what my club’s performance will be.

“It’s every player’s dream to represent his country. And my dream is to play for Nigeria one day. I am an attacking midfielder, like Oghenekaro Etebo.

“Unfortunately, but thankfully, though, leagues around the world have been halted due to the Coronavirus pandemic, so, I couldn’t get to begin playing. But after the pandemic, you will hear the story of my exploits in Slovakia.

“ŠKF Sereď is a big club and they are well respected in the Slovakian top flight league, even though they are not among the top five teams on the log for now, but once the league resumes, I will help them get to a comfortable position on the league table”, the player promised.

Športový Klub Futbalu Sereď gained promotion to the Slovak Super Liga after playing in the 2017-18 season in the second tier of the Slovak football league system where they finished the season in first place, winning the second division liga championship.

With Omale eagerness to establish himself in his new club, the global Coronavirus pandemic broke out, which  forced  the Central European-based Slovak Club and league to suspend sporting activities as preventive measures following directives by the country’s authority.

The diminutive midfielder who plays like Kenyan international footballer, Victor Wanyama, began his football career with renowned Pepsi Academy, before swinging pendulum to Ambassadors FC all located in Zaria, Kaduna State, and later Sokoto United where he spent two seasons before his recent move to Europe.

While with Sokoto United, the prodigy scored a total of two goals and provided eight assists.

He had unhidden admiration for Manchester United FC of England, a club he prays to play for one day.