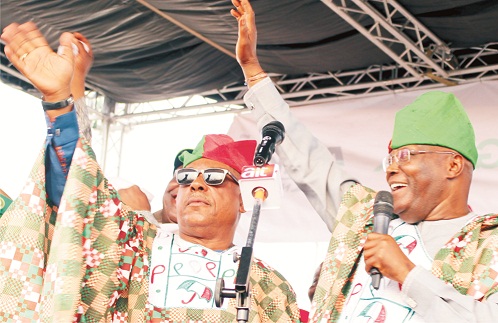 By Jubril Bada, Adekola Afolabi and Victor Akinkuolie
|
The presidential candidate of the Peoples Democratic Party (PDP), Alhaji Atiku Abubakar, has promised that 40 percent appointments in his cabinet would go to youths if elected in the coming polls .

Abubakar, who made the promise during his campaign rally in Akure, equally pledged 30 percent appointments in his government to women, saying that both youths and women are important segments of the country’s population.

He further promised that PDP under him would also restructure the country to enable Nigerians be in charge of their resources for the development of their states.

His words: “These are the promises l have made and l will implement them”.

He advised his supporters to vote massively for him and all other candidates of the PDP and defend their votes during the general elections to prevent rigging.

He emphasised that APC-led Federal Government must be voted out in the coming February 16 election due to the failure of the party to fulfil its campaign promises made in 2015 to the people.

On his part, the National Chairman of the PDP, Prince Uche Secondus, said the economy and security of the nation are in bad shape due to lack of focus and commitment of the present government.

Secondus, therefore, called on Nigerians to vote for Atiku as the next president to revamp the economy of the country.

“Atiku is a God chosen man that should be voted for come February 16. We want a president who will work for 24 hours for the economy of the country to be revamped”, he said.

Speaking at the campaign rally, the Director-General, Atiku Campaign Organisation and Senate President, Bukola Saraki, apologised to Nigerians for making serious mistake by supporting Muhammadu Buhari for president in 2015.

According to him, Buhari has failed to fulfil his promises to provide security for Nigerians, create three million jobs for youths in the country just as the economy is in comatose under his government.

Earlier, the PDP presidential candidate had in Ekiti State stressed the need for INEC to ensure one-man one-vote and  that all votes are counted during the conduct of the exercise.

Atiku used the occasion to thank the people  for coming out enmass to welcome him to the state, promising to provide security, job opportunity for the unemployed youths by resuscitating the weak economy in the country.

Earlier, at the palace of Ewi of Ado-Ekiti, Oba Adeyemo Adedugbe, where Atiku paid a courtesy visit to all traditional rulers in the state, chairman of Ekiti State council of traditional rulers,  Oba Ademola Ademolaju, the Oloye of Oye-Ekiti, urged Atiku to run an inclusive government if elected during the general elections.