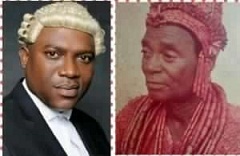 From Jimoh Ahmed, Ikare Akoko
|
Olowo-elect, Prince Ajibade Gbadegesin Ogunoye has spoken glowingly of his vision to lift Owo, the people and youths in particular to greater economic heights.

“My goal, God willingly is to make Owo an economic hub where everybody will find space to earn a living and also live in peace devoid of distrust”,Prince Ogunoye said.

The Olowo who was welcomed to the palace amidst thunderous shouts of Baba o, and beaming smiles said his reign will herald a new  dawn for the kingdom, promising to pursue peace and reconciliation.

“The youth will be engaged because the future is in their hands. We will engage the youth in ventures that will make them add value to Owo kingdom”, adding that the much cherished culture and traditions of Owo will receive his priority attention.

” Owo is blessed with unique culture. Our culture and festivals will be a great priority. We will promote this to the international community, so that we belong to our rightful position in the global scene”.

Meanwhile, all is now set for the commencement of the installation rites of the Olowo-elect as his selection by the Senior Omolowos has been officially ratified by the Owo kingmakers.

The kingmakers in accordance with the provision of Olowo of Owo Chieftaincy Declaration,  reaffirmed the selection process and the election which eventually produced Prince Ajibade Gbadegesin OGUNOYE as Olowo-Elect at a brief ceremony that took place at the Olowo’s Palace on Friday.

The Chairman of the Kingmakers who is also the Ojumu of Owo, High Chief Olanrewaju Famakinwa, who declared the affirmation informed that the reaffirmation was in compliance with the  provisions of the Olowo Chieftaincy Declaration, other subsisting Chieftaincy Laws of Ondo State and the customs and traditions of Owo.

According to the Ojumu of Owo, the kingmakers  must reaffirm the selection within 14 days  after an Olowo-elect might have been presented to the kingmakers by the Senior Omolowos in line  with the tradition of the ancient town.

Chief Famakinwa disclosed that the brief ceremony would go down in the annals of Owo history as it was the first of its kind in the community.

Speaking during the occasion, the Director of Local Government Administration for Owo, Prince Segun Omojuwa who was there as an observer, admonished the kingmakers and indeed the people of Owo to support the Olowo-elect to sustain the existing peace in the community.

While responding, the Olowo-elect, Prince Ajibade OGUNOYE described the event as historic as the affirmation by the kingmakers was unanimous just as he reiterated his commitment to move the ancient town to greater heights.