Home General Interview I’m determined to contribute my own quota 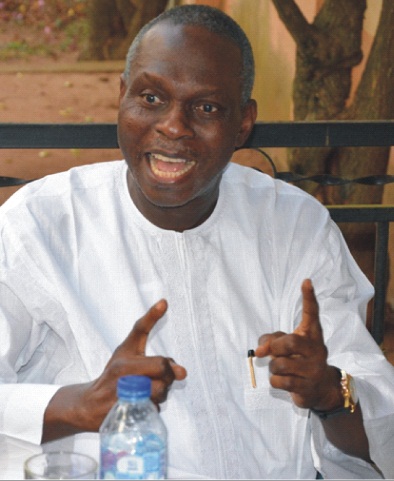 Princ Dapo Adelegan is a seasoned marketer and PR Consultant with over 30 years experience in the cooperate world. He is the immediate past President of the Nigerian British Chambers of Commerce. The seasoned Public Relations Practitioner spoke with THE HOPE on his ambition to become the next governor of Ondo State. Our reporter, Saheed Ibrahim spoke with him. Excerpts:

Let me first thank The Hope team for finding me worthy of this interview and let me thank you for the work you are doing but I can assure you by his grace if we are elected, it will be a primary project for us and we will build on the work that is being done by the current government to ensure that we will become a force to be reckoned with in the annals of journalism in the country.
First, it is a privilege to be spoken of as a governorship candidate in Ondo state with 4.5million people. For anyone to be regarded as worthy of becoming a governor, that is grace and I thank God for that. I am also thankful to the party, the leaders of ADC who decided to give me a platform. I am not the one that secured that platform I was given and that is the truth – to be able to provide an alternative agenda for the development of Ondo state.
My primary motivation is one, to be able to restore the dignity of my hometown Owo and the gold standard for politics in Ondo state was set by an Owo man, the late Michael Adekunle Ajasin and history has it that in four years, he built a university from the scratch, he built the first state owned bank-Owena Bank. He built seven industries or more. Oluwa Glass industry in Okitipupa and others. The secretariat he built in Alagbaka, not one block has been added by successor governors but we have an opportunity again for another Owo man. He has done his own, finishing his four years and he has done his best. We want to ensure that we build on the golden legacy of Adekunle Ajasin and Governor Rotimi Akeredolu, so another Owo man is coming up, saying that last four years of our eight years candidacy, we want to redevelop the economy of Ondo state.
My credentials are nothing; it is the experience of thirty-two year as a corporate player, leading to the president of the Nigeria British Chamber of Commerce. So I have been in business for thirty two years. God has been extremely kind to me and you don’t have early success at twenty-five to be the father of Lekki, moving to all kind of international engagements, marketing Nigeria all over the world, becoming president of Nigeria British Chamber of commerce God does not permit that without an assignment, there must be something he is going to ask from you and having done thirty-two years, I am back home and I am determined to contribute my own quota particularly to revive our economy, if there is no economy there is no polity. The word politics comes from policy; which the Greece gave to their cities

You were endorsed by the former president of Nigeria, Cheif Olusegun Obasanjo. How do you think this will boost your chances of winning?
Let me put it this way; whatever you say about ex-president Obasanjo, he is the father of Nigeria. As a matter of fact, in Africa, he is regarded as the President of Africa.After Mandela, he is our leader by God’s grace. The position he has occupied and he is still occupying. As a bonafide Omoluabi Yoruba son, if I want to take this kind of adventure, I will have to take the blessing of our father which is Olusegun Obansanjo and that is what I did.
I remember I knelt down and he prayed for me and that is symbolic and very powerful. Secondly, we want him in his life time to see a prosperous Nigeria. Our plan to make Ore our Chicago, to make Ondo state number one economy in the country and globalize our economy to be one of the bearing the 4th largest economy in Africa because we will market it. Ondo state needs a man like that who can call anybody in the world and they will say yes. Obasanjo as president did what had never been done in the world; he got the world to forgive us our debt. Imagine Obasanjo supporting our government in Ondo state and becoming a champion for the economy of Ondo state.

Recently, the country has been facing insecurity and Ondo state has its dose. What strategy are you bringing in to curb this?
The greatest antidote to security is employment any society that does not develop its economy to provide industry, to provide employment is ready for anarchy. Send a man to the university, give him intelligence, send him to a vocational training and he has no job. You are recruiting him to armed robbery, to kidnapping and cybercrime. So for me a million policemen or soldiers cannot stop insecurity. Only jobs can stop it and without economy there are no jobs and without jobs, insecurity will continue to go on. So vote the future of your children vote the people that can bring you the economy and industry and jobs. And lets thank our governor for the job he has done so far but from here on we are taking over.