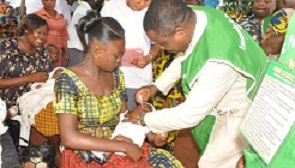 He disclosed this during the social mobilisation committee meeting in Akure.

Akanbiemu who was represented by the Director Planning, Research and Statistics, Dr. (Mrs.) Yetunde Olagbuji, noted that the agency has recorded success in its activities due to the support from stakeholders especially in Immunisation coverage.

While noting that the National Immunisation Plus Days (NIPDs) started Saturday, he reiterated the agency’s commitment towards embracing community participation in order to achieve more success in the state.

Olagundoye noted that the state had two OBR in May and June which she described as huge success.

While noting that the various immunisation teams were adequately monitored and supervised, she stressed the need for stakeholders to sensitise the public on the need to present their children for Immunisation.

Olagundoye, who stated that Vitamin A vaccine which will be taken by children from 6-59months, has been integrated into the exercise which started on Saturday.

While calling on the people not to resist the vaccination, she however added that the various immunisation teams will move from house to house for the exercise.

He explained that for the Outbreak Response activities (OBR) there are three types of polio virus; type 1, 2 and 3 noting that the vaccine to conquer both type 1and 3 will be the one administered.

However, he called on stakeholders to help the public differentiate between the vaccination in order to secure the coming generation.

Shedding light on the integration of Vitamin A to NIPDs, Director, Nutrition, OSPHCDA, Mrs. Kikelomo Adejuwon described as enormous the benefit of Vitamin A in children.

She explained that it has been integrated into the exercise in order to reach all eligible children from 6-59months with house to house strategy, increase Vitamin A coverage and boost the immunity of children against diseases among others.

She stated that it increases the chances of survival and also promote growth in children.

Also speaking, State Health Educator, Mrs. Yetunde Akinyosoye sensitised the people in preparation for the Men A(meningitis vaccination) which will soon be introduced into the schedule of immunisation.

The leadership of the National Assembly yesterday called on all Nigerians to cooperate in the fight against insecurity in the country.

The Deputy Senate Leader, Senator Ajayi Boroffice stated this in Akure, when he led the National Assembly delegation on a condolence visit to the leader of the Pan Yoruba Socio Political Group, Afenifere, Pa Reuben Fasoranti, on the death of his daughter, Mrs. Funke Olakunori.

Mrs. Olakunori was killed recently at a spot near Kajola on Ore- Sagamu Expressway on her way to Lagos after visiting her aged father.

The Deputy Senate Leader said the National Assembly, comprising the Senate and the House of Representatives was concerned about what is happening, adding that motion and resolution had been taken on the ugly development.

He therefore said the  National Assembly would work hand in hand with the executive to find lasting solution to insecurity in the country.

“We believe that action has to be taken to stop the nefarious activities of these people. We are fighting a war that has no frontiers. We are fighting those we don’t know their location. But, with our conscious efforts we will find solutions to it,” Boroffice said.

In the same vein, Senator Ibikunle Amosun said all National Assembly members were all saddened with what happened and are determined to find a lasting solution to all these anomalies.

Amosun said all hands must be on deck because no meaningful development can happen in an atmosphere of insecurity.

He said the National Assembly was  determined to have a round table discussion once again.

Amosun said:  “Security is collective responsibility of everybody and we have been talking about state police, community police, getting our people employed, fighting insecurity in the hard way.

“I think all of us must come together to find a lasting solution to all these  incidents that have taken our country by the jugular. We need to still give kudos to our security and I am sure they will not rest until we have a secured Nigeria,” he added.