Importance of effigy in burial ceremony in Owo 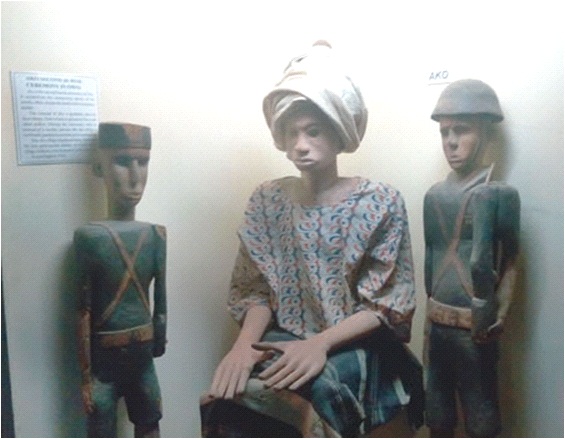 The Ako Effigy is used in the second burial ceremony in the town of Owo in Yoruba – land and comes up after months or years of the first burial, when the corpse of the deceased must have been committed to mother earth.
Aesthetically, Ako is a naturalistic, life – sized effigy. It must be a direct replica of the deceased person and the visible parts of the body must at least be a portrait as realistic as possible which must reflect any distinct marks on the deceased body. This naturalism which is of great antiquity is firmly rooted in the concept of Ako ceremony and must be as ancient as the institution itself which is well over 500 years old. It is regarded as a display of financial strength and a rare feat on the part of those who dare to take the risk due to its huge financial requirement. Hence, any family that successfully takes on celebrating Ako ceremony have family prestige boosted and as a mark of their status elevation, they are afterwards allowed to wear a specially patterned sash, Ashigbo (a prestigious toga) to boost their prestige.
Ako is not performed by everybody, but a few affluent members of the society because the paraphernalia surrounding the celebration involves huge financial demands. Thus, it is the most expensive burial ceremony in Owo Kingdom. During the ceremony, an Ako Effigy of the deceased ( striking resemblance) is richly, colourfully, and expensively dressed according to the rank or position of the deceased in the society e.g hunters, high chiefs, warriors, e.t.c . The effigy is kept in state for nine days and open to visitors. On the ninth day, the Ako Effigy is carried shoulder high by hefty men (Ugbamas), paraded round the town by the celebrants amidst singing and dancing. Amongst items required are cows or bulls, about two hundred goats, chickens, sheep, antelope meat, pounded yam, kolanuts, palmwine e.t.c.
At the end of the ceremony, the Ako is undressed, dismembered (broken into pieces), tied up in a black cloth and buried in a grave along with the heads of a black cow, goat, sheep and hen in the presence of selected members of the deceased family and relatives by Chiefs Ajana and Osere. However, due to modernization, the Museum in Owo is opportuned to retain the last Ako Effigy for preservation. After the burial, a lot of feasting and entertainment follows.
It is believed that the ancestors do not die, but are still around the living and protecting their loved ones. The ceremony symbolizes the continuing nature of the deceased wealthy, noble and chiefly social status and office even in the great beyond. In preparation of “ehin – iwa” (the after – life), the Ako ceremony is of great importance because those who pass from this world to the next, look forward to an afterlife which is superior to temporal existence. A total reconstruction of the physical, social and psychological identity of the deceased takes place through the Ako effigy. A controlled Ako naturalism is employed which portrays the effigy of the deceased with eyes open to signify a response to the plea by the survivors asking him/her not to sleep in “Orun” (heaven). It is believed that he/she would open his/her eyes wide and always look after his/her children, taking care of them, providing for their needs and aiding them in difficulties. The Ako device makes it possible for the distinguished dead to enter “Orun” and start the after – life with assured success.
Okhamafe writes from National Museum, Owo.