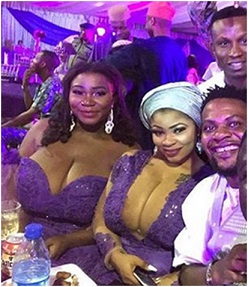 It is the hallmark of an African woman to wear conservative but beautiful traditional dresses. Such dresses conform with the cultural values and norms of Africa. The traditional African attire portrays decency, respect and high moral values. Such traditional dresses include long flowing khaftan, long ankara skirts and long-sleeved or short-sleeved blouses.

An African woman then was a personification of modesty, sanctity and uniqueness. Her appearance was simply admirable.

Naturally, when an African man wants to get married, among the criteria for his considerations was the woman’s manner of dressing. A young woman who had an indecent dressing style was assumed to be bereft of good moral standard and decency because proper dressing was a product of moral values and decency. For instance, no man would ask  the hand of a girl who was notorious in her vicinity for provocative, indecent dressing in marriage. The belief then was that if any woman  expose  her sacred parts to the public by wearing revealing clothes, such had debased womanhood and was not suitable as a wife material.

However, today, the invasion of foreign culture has changed the narrative. Indecent dressing has become a way of life.

In the words of Miss Ifeoluwa Adewalere, it is called “naked woman costume”. What most people wear nowadays in the name of fashion offend people’s’ sensibilities. Both men and women are guilty of the act. The men sag their trousers revealing their underpants (boxers). They wear tattered jeans with holes, tight fitting and/or unbuttoned shirts; while the women have gone haywire, seemingly bent on outshining the men. Everywhere you go, you see ladies and women, parading in dresses that barely cover their nudity. Even in places of worship and offices, they showcase sensitive body parts at will.  In fact, if you do not reveal your cleavages, such is regarded as unfashionable. The Hope spoke with some people on their take about this trending fashion.

A florist, Mrs Florence Okenwa, condemned the idea of bringing nudity into fashion, saying that unnecessary exposure of the body could be interpreted as being irresponsible.

Her words: “ I don’t support nudity or the exposure of our  treasure  in the name of fashion. There is an adage that says that one should dress in the way he / she wants to be addressed. Ladies exposing their bodies is an invitation or temptation to the opposite sex. I believe strongly that indecent dressing can devalue a woman because it exposes her treasure. To the males, it gives them an image of irresponsibility. I see it as indecent, when people, in the name of fashion, open sensitive parts of their bodies,” she said.

Sharing a similar view, a parent and teacher, Mrs Ebunoluwa Faloyo, advised people, especially women, to stop exposing their bodies, adding that even the Bible call the body the temple of God. She said: “Ideally, people, especially women, should be conscious of what they wear. Learn to carry yourself with a sense of dignity. Wearing clothes that expose your body means that you don’t appreciate God who created you. You don’t have a sense of dignity and responsibility.

“The most disturbing aspect about this crazy fashion is that they’ve crept into the churches. It is very common to see ladies exposing  cleavages in churches. It has now become a competition among ladies, even in the church of God. It becomes more nauseating during   wedding.

The groom will suit-up with tie, looking responsible, while the bride would expose her cleavage as part of fashion to entertain guests thus looking like one of those girls in brothels. Yet, officiating pastors who are expected to correct such abnormality would still go  ahead to join them in what should be described as unholy matrimony.

“The way you dress will speak for you. Your wisdom and intellect are  what will attract the right people to you, not your nakedness. If you are intelligent, of good behaviour and you dress yourself in a way that will label you a prostitute, people will have to approach you to know that you are not, which is not possible in most cases because you have sent the wrong impression.

“ A sane lady doesn’t  go about exposing her nakedness all in the name of fashion. Beautiful things are guarded jealously.  Those who dress like that, most times, have nothing valuable to offer. The man is not complete without a woman. So, why go about exposing the thing that will complete your being to the whole world? Ignorance, insecurity and lack of fear of God are the reasons people dress the way they do. The implication is that it is an invitation to loose men out there, because you begin to draw unnecessary attention  like rape. Although,  your dress sense does not justify the action of rape, and most cases of rape do not have anything to do with indecent dressing,  for men with psychological problems, it is an incentive.”

To get rid of the social malady, Faloyo said that the proper way to go about it was reorientation and educating people on the right values.  She suggested that schools should have dress code;  parents should also educate and teach their children the right values.

“In schools, they should have rules like the uniform not  short   so that the children will grow up with the right values.”

Reacting differently, a fashion designer, Mr Henry Kehinde, hinted that nudity is mixed with fashion all over the world, and that it usually depends on what the designer is promoting or showcasing. “The designer is trying to promote the lingerie, not the models. You have to be able to figure out what is being promoted, because nudity and models are parts of fashion,” he said.

An undergraduate, Comfort Oluwatobi who described indecent dressing as the trending fashion,  said that she does not dress to attract the attention of anybody, but if people decide to stare, they are welcome as long as she feels good and safe.

Her words: “Why should I be bothered that people are staring at me? Is there any law that says I cannot wear what I like? It is so sad that we are in the part of the world where men feel that women should be their slaves, that they are entitled to every woman they see. It is my body; I can wear whatever I like. Who are you to judge me that I don’t have morals because of what I am wearing? The same men that condemn a lady publicly for putting on something sexy would go secretly to admire, adore and even woo them.

“We live a pretentious life in this part of the world and that is why we are not growing, rather going backward. I’m sorry to say this: African mentality won’t allow us to develop fast. A psychopath, who cannot control his sexual libido, rapes a woman and you blame the woman for wearing something sexy. When you are hungry in traffic, do you snatch a sausage from the hawker because he tempted you by hawking the product? We need to be sincere, it is a free world, she argued.”

In the view of a fresh graduate, Ms Ifeoluwa Akinwalere, though she agreed that nudity is not  African,  she  said that it is the fashion in vogue called “naked woman costume”. According to her, nowadays, one will not be called fashionable if one does not expose what ought to be covered, and if anyone raises a voice, they would be seen as not being sophisticated.”

In the contribution of a seamstress, Gift Oby, there is nothing wrong keeping with the latest fashion. She added that as a fashion designer, she must sew the exact styles that her customers want in order to keep them.

She said: “ We have come to an era where showing some skin seems to be the in-thing and sometimes termed the new definition of sexy by this generation, while others call it civilization. Come to think of it, nudity earns some ladies their daily bread. If that is what my customers wants, I cannot do otherwise. Flaunting what you have is the fashion for ladies in vogue and they should be allowed to enjoy their time to the fullest, since they are not ready to be corrected.

“All I know is that today’s generation want to make a loud statement with everything they have including exposing their sensitive parts. They argued that fashion should be taken to the next level because it is dynamic. To them, nudity is sexy  and reveals the inner beauty. In as much as I don’t like it, I cannot force my customers to do otherwise. I think a reorientation will go a long way to correct what today’s youth term fashion revolution,” she added.