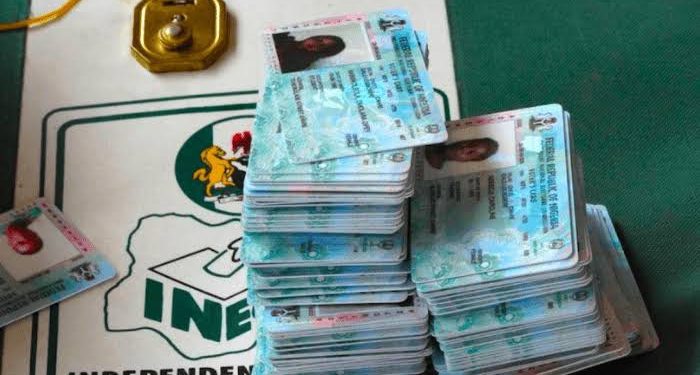 The Independent National Electoral Commission, INEC, has extended the deadline for the collection of Permanent Voters Cards, PVC, across the country.

The increasing instrest shown by registered voters to collect the cards informed the electoral umpire’s decision to extend the deadline.

INEC has also vowed to punish any staff found to have extorted or discriminated against any registered voter in the issuance of the PVCs.

National Commissioner in charge of Information and Voter Education Committee at the commission, Barr. Festus Okoye disclosed this in a statement issued Thursday in Abuja.

He said the decision was a fallout of Thursday’s regular meeting wherein the Commission deliberated on a number of issues, including the ongoing collection of PVCs nationwide.

“The Commission is encouraged by the turnout of registered voters and the surge in the number of collected PVCs across the country. In some of the States, as many as 100,000 PVCs were collected in the last five days since the devolution to Ward level started on Saturday 6th January 2023.

“The Commission is determined to ensure that registered voters have ample opportunity to collect their PVCs ahead of the forthcoming election. For this reason, the timeframe for collection of PVCs is extended by eight days. Instead of ending on Sunday 22nd January 2023, the collection of PVCs will continue until Sunday 29th January 2023. At the moment, the period of collection is 9.00am – 3.00pm daily (including Saturdays and Sundays).

“As a result of this extension, there is a consequential adjustment of the collection by location as follows:

Meanwhile, Okoye said the Commission is investigating allegations of extortion by officials at some of the collection centres and inducement by some unscrupulous voters to circumvent processes in order to obtain their PVCs.

“Those found culpable will be face disciplinary action and/or prosecution”, he declared.

Similarly, the Commission, he said, is disturbed by allegations of discriminatory issuance of PVCs in some locations.

“This is against the law. All bonafide registrants are entitled to their PVCs and to use them to vote on Election Day in any part of the country where they are registered.

“Resident Electoral Commissioners (RECs) have been directed to ensure that no such practices occur nationwide and take immediate disciplinary action against violators”, Okoye added.

He explained that INEC has printed over 13.86 million new PVCs, but advised field officials to immediately notify their respective RECs should it emerge that some cards could not be located.

“For the record, the Commission has printed 13,868,441 PVCs for all new valid registrants as well as applicants for transfer or replacement of cards.

“Nevertheless, issuing officers should compile any complaints about non-availability of cards and forward them to their immediate supervisors for the attention of Resident Electoral Commissioners (REC) who shall compile and forward them for necessary action.

“The Commission once again appreciates the patience and perseverance of citizens as we continue to finetune our process to make the collection of PVCs easier”, he stated.