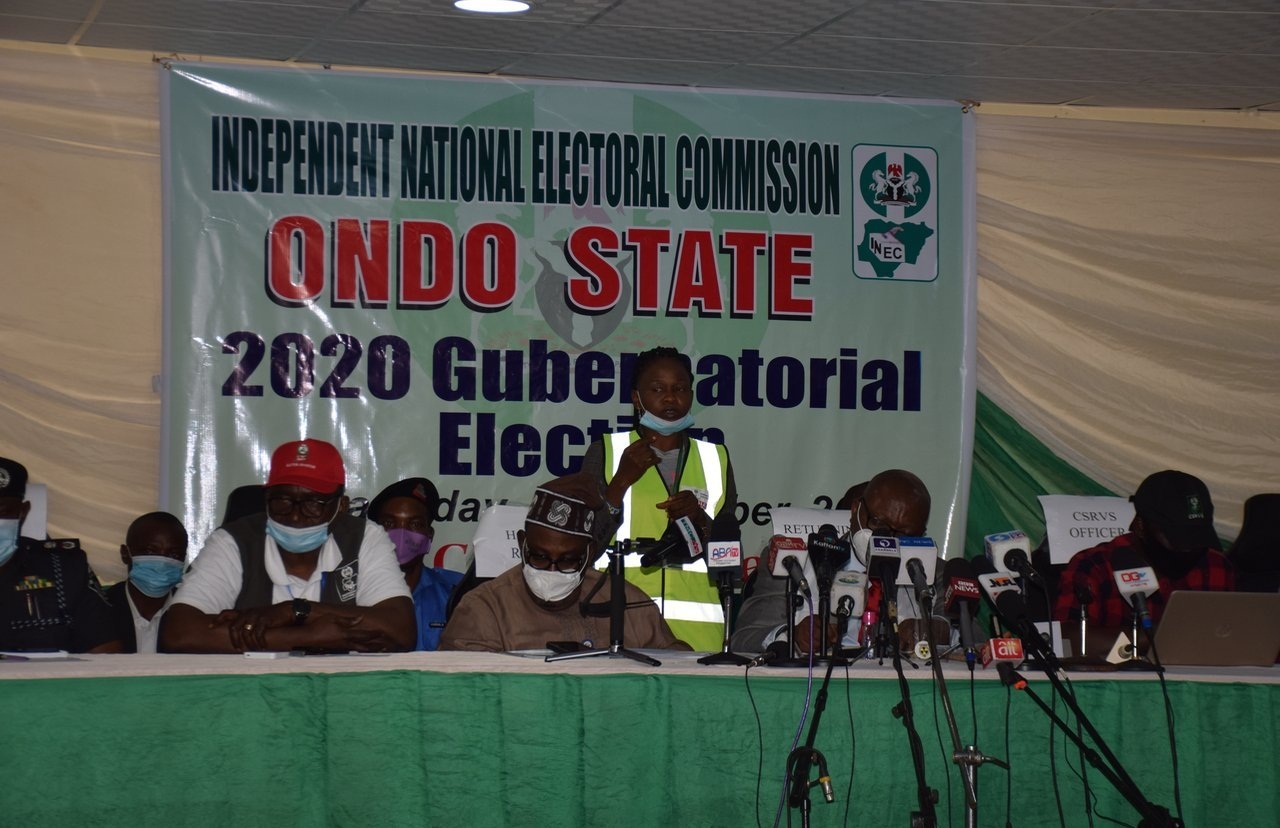 A civil rights organisation, which monitored the just concluded Ondo state governorship election with 600 field observers and 28 mobile observers has confirmed that the results of the election released by the Independent Electoral Commission, (INEC) reflected the ballot cast at polling units across the state.
The Co-Chair of the organisation, Ezenwa Nwagwu made this known while delivering Yiaga Africa’s Process and Results Verification Statement on the election in Akure shortly after the declaration of Governor Rotimi Akeredolu as the winner by INEC.
The organisation also announced that the INEC’s official results for voters turnout and rejected ballots also fell within its estimates.
He noted that “had the results been changed at the ward, LGA, state coalition centres, the official results would not have fallen within Yiaga Africa WTV estimated ranges.
Yiaga Africa therefore called on governorship contestants, parties and voters to have confidence that INEC’s official results for the 2020 Ondo gubernatorial election reflect the ballots cast at the polling units.
While charging the winning candidate to be magnanimous in victory, the election monitoring organisation called on those who did not win to accept the results. “Because they reflect the vote cast, hence the need to show maturity and maintain peace. ”
Yiaga Africa had earlier commended the people of Ondo State for coming out en-masse to exercise their franchise during the Saturday gubernatorial election.
The Co- Chairman of the organisation, Dr Aisha Abdulahi noted that despite the rain that temporarily disrupted voting in the morning, the voters were patient and resilient to cast their votes.
While identifying some polling units, where voting was disrupted, Yiaga Africa commended the security agents for displaying professionalism and living to expectations.
Although voting commenced in just 3% of the polling units at 8:30am but increased to 89% an hour after, Yiaga Africa observed some improvements in the conduct of the election over what was obtained during the Edo governorship poll last month.
“Yiaga Africa notes the improvement in the arrival time and set up of polling units. As at 7:30 am, Yiaga Africa reported that INEC officials had arrived in 77% of polling units. This is a significant improvement compared to the September 19 Edo governorship election, where officials arrived at 7:30 am in 38% of polling units.
“The early arrival may not be unconnected with the new policy introduced by INEC requiring all National Union of Road Transport Workers (NURTW) drivers to deploy their cars to the Registration Area Camps (RAC) 24hrs before the commencement of polls. This policy aligns with Yiaga Africa and other civil society groups’ recommendations on transparent and efficient management of election logistics for the election”, she revealed.
Part of its observation was compliance with COVID-19 protocols excluding social distancing
Yiaga Africa however stated their cases of violence at some polling units, major political parties in the election induced voters with money and the secrecy of votes was largely compromised by voters and party agents deployed to ensure votes bought were delivered.