Home News Infrastructure: ‘Our best yet to come’ 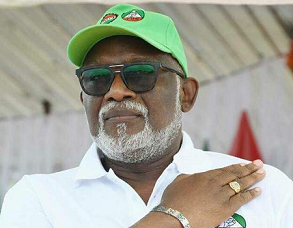 Infrastructure: ‘Our best yet to come’

By Adekola Afolabi
|
The present administration led by Arakunrin Oluwarotimi Akeredolu, has  said its best in terms of  infrastructural and industrial revolution that would open up the economic potential of the state to the international community was yet to come.

The Chief of Staff to the governor, Chief Olugbenga Ale who made the revelation while speaking with Government House reporters yesterday in Akure, the Ondo state capital, noted that the present administration would continue to harness the economic potential of the state for the benefit of the citizenry.

He also stressed that Governor Akeredolu led administration remains focused and determined to ensure youths in the state are gainfully engaged through various windows of opportunities government is opening to drastically reduce youth unemployment in the state.

Ale particularly appreciated God and the good people of the state for their unalloyed support since the present administration came on board, promising that government would continue to do its best for overall development of the state and the people.

The Chief of Staff emphasised that all the ongoing infrastructural projects across the state would be completed while many more would be initiated for the comfort of the citizenry and the socio-economic development of the state.

He explained that despite the dwindling federal allocation, the state government has not reneged on its promises of dividends of good governance to the people of the state, saying Akeredolu-led  government has stepped up its Internally Generated Revenue and blocked all leakages with a view to providing the needed infrastructure and amenities across the three senatorial districts of the state.

He revealed that Arakunrin Oluwarotimi Akeredolu has promised to  continue to make the comfort of the people of the state central regardless of where they live.

“We have promised to make the people of Ondo State the centre piece of our administration. We should expect more projects, more roads, more water scheme, improved health facilities, more industries, more employments for our youths. In fact, it is going to be all-round development.

“If we were to go by what comes into the state, we will not do anything from day one.

But we have decided to look inward and get money to ensure better welfare of the people of Ondo State. We will continue to work harder on our Internally Generated Revenue, IGR, so that we will have more resources for the development of the state.

The Chief of Staff further stated that Akeredolu’s sterling efforts at industrialising the state have been yielding positive results as Ondo-Linyi Industrial Hub in Ore has employed hundreds of youths in the state.

He said apart from the direct employments from government  especially in the health sector, through industrialisation, a good number of youths in the state have been gainfully employed, thereby taking them off the streets and reducing youth unemployment in the state.