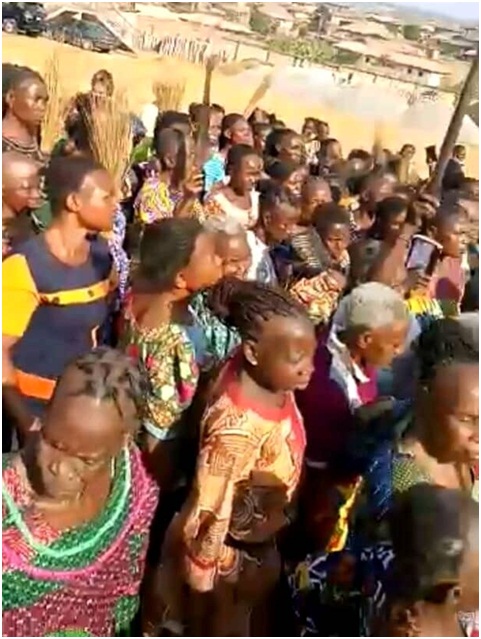 Worried by the rising security challenges viz a viz kidnappings, ritual killings and armed robbery cases in Akoko area, traditional rulers and stakeholders are currently brainstorming on how to curb the menace.

The Olubaka of Okaland and Chairman, Akoko Divisional Traditional Council, Oba Yusuf Adebori Adeleye, made this known while addressing some women protesters from the four local government councils making up Akoko land.

The women, who came out in large numbers with some half naked and holding brooms had staged a peaceful protest over the weekend while they offered prayers for the end of the ugly trend.

The protesters who included Christians, Muslims and traditionalists offered prayers to God and also appease the deities as part of communal efforts to stave off the spate of criminalities bedeviling Akoko and Ondo State.

In the same vein, all the traditional rulers in the areas also converged at Oka-Akoko with a view to proffering a lasting solution to the bloodletting crisis.

Oba Adeleye said that security challenges facing the country, Ondo State and Akoko will soon become a thing of the past saying that communal efforts and divine efforts will be applied as parts of solutions to the problems.

The monarch appealed to various communities in Akokoland to form vigilante groups while local hunters must be encouraged to compliment the efforts of regular security agencies.

Oba Adeleye frowned at the situation where investors refuse to come to Akoko area.

He commended the efforts of Governor Oluwarotimi Akeredolu for putting Amotekun Security  Outfit in place to reinforce the existing security apparatus saying that Amotekun has done well.

According to him, insecurity was the reason why investors held back  from Akoko environs, while he assured industrialists of a safe operating environment, adding that Governor Akeredolu has done well in reducing crimes to its lowest ebb

At Akungba Akoko, wife of the Alale of Akungba, Olori Esther Ajimo, led other women round the community, praying against evildoers, saboteurs and bandits.

Addressing the peaceful protesters on Saturday, the Monarch of Akungba, Oba. Sunday Isaac Adeyeye, Ajimo III, placated the women and urged them to remain peaceful, saying efforts are in top gear on the part of royal fathers to bring the perpetrators to book.

He noted that the wanton killings portend an ominous sign of danger, maintaining that traditional institutions in the zone won’t footdrag in ensuring that peace and tranquility return as soon as possible.

Oba Adeyeye also lauded the State Governor for being solidly behind the State Security Network Agency also known as Amotekun, adding that the emergence of Amotekun ameliorated the growing cases of abduction among other societal malaise in the State.

In the same vein, the regent of Akunnu Akoko, Princess Tolani Orogun, who led the protest, commended the women for coming out at ‘this crucial time to talk to God to come to their rescue.’

Princess Orogun want the federal government to rise up to the task and fight insecurity with more vigour.