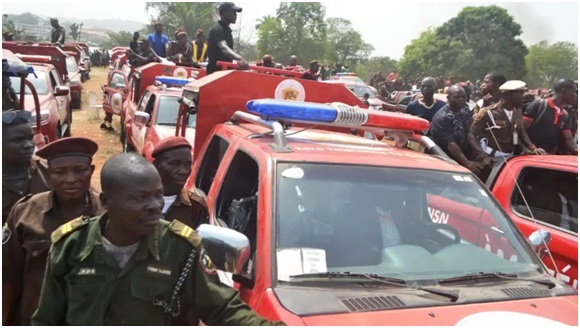 Efforts of the Ondo State Government to tighten up security at various black spots across the 18 local council areas of the state is yielding desirable results, as local vigilante operatives and hunters are working in collaboration with Amotekun to nip in the bud activities of criminals operating in the state.
To this end, the local hunters are to work collaboratively with Amotekun in ensuring that farmers in their respective communities are protected against any form of attack or oppression .
The Senior Special Assistant to the Governor on Security Matters, Alhaji Jimoh Dojumo, who dropped this hint while speaking with The Hope Metro, said the local vigilante operatives and hunters have been mandated to be vigilant and proactive in their communities.
He said the state government has taken appropriate security measures targeted at securing various communities from marauders and people of dubious characters from causing any possible attack on innocent victims.
His words: “We have been working with the local vigilantes and the hunters before now. The Amotekun is not operating in isolation as they carry all security volunteers along in all their operations,” he said.
Dojumo hinted that farmers should continue to go to their respective farmlands without any fear of attack, adding that government is committed to ensuring the safety of everyone in the state.
He stated that all the entry and exit points are already protected from any external aggression, adding that the job of security is serous business that needs everybody’s involvement.
On the issue of guns in the wrong hands and in circulation, Dojumo said it is another issue that the security forces are not taking for granted, adding that efforts are on to recover them.
According to him, it requires a lot of efforts couple with credible information from the public to achieve a desirable result.
He commended the Amotekun and security agencies for working in harmonious relationship that have helped in bringing crime and criminality to the barest minimum.
He, however said the aggressive joint security patrol in the state will continue just as he urged the general public not to panic as all efforts are geared towards making the state a safe place for all and sundry.