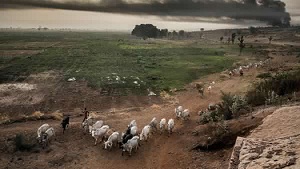 Victor Akinkuolie,  Ado-Ekiti
|
In a bid to end the menace of insecurity in the country, women farmers in Ekiti State have declared a one-day fasting.

The farmers, under the aegis of women in agriculture submitted that the fasting period would be channelled towards fervent prayers, for the nation to come out of incessant kidnappings, farmers/herdsmen clashes and all forms of insecurity.

The Executive Director, Women in Agriculture, Mrs Funmi Akinsola, in a press release in Ado Ekiti on Thursday said the fasting was declared to seek God’s intervention on the insurgency and insecurity pervading the country

The statement said, “The prayer is to call God’s attention on herdsmen clashes with farmers that have claimed many lives, deformed many victims including destruction of many property.

“Insecurity has created fears for farmers in our farms, the implication of this is famine in the country if  not curbed.

“When there is violence, women are mostly at the receiving ends. And if women are not victims, it may be their husbands, children or relatives.

“That is why we, Women in Agriculture cry out for God’’s intervention on this great nation to put on end to herdsmen/farmers clashes, killings, Boko Haram attacks, kidnappings and all manners of evil perpetration in the country.

The women in Agriculture, therefore, called on all members in the state to join the team on the fasting Day between 12.30 to 1.00pm at the office located at No, 20 Ajibade Lane, in Ado Ekiti.

“We would gather to lift our hands to God to deliver us from the hands of the wicked people troubling Nigeria.

“We enjoin all mothers and inhabitants of this great nation whereever they are, to observe the fasting on this day, Sunday, July 7 with fervent prayers

“Prayer is the master key! Peace will reign in Nigeria “, the statement said.