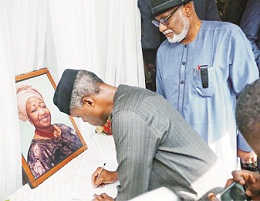 By Adekola Afolabi
|
The Vice President, Prof. Yemi Osinbajo yesterday disclosed that the Federal Government is coming up with a new policy on community policing to tackle the rising cases of insecurity in the country.

Osinbajo who stated this during his visit to Afenifere Leader, Chief Reuben Fasoranti on the demise of his daughter, Mrs Olufunke Olakunrin noted that the new policy would give room for the recruitment and training of policemen who will serve within their own local government.

He said another important issue is intelligence gathering. “The President recently met not only the Service Chiefs but also the Inspector General of Police  where he laid out a new policy on community policing, as one of the most important measures at combating crimes.

Mrs Olufunke Olakunrin was killed by yet to be identified gunmen along Ore expressway on her way to Lagos. She was age 58 years.

The Vice President in the condolence Register wrote: “We cannot adequately express our grief but we stand with the family and especially Papa and the children in this period of sorrow, praying the Almighty God will bless this family anew and afresh and comfort them all, in Jesus name.”

In an interview with Prof. Osinbajo after the condolence visit, he described the incident as devastating and shocking.  He prayed God to grant Pa Fasoranti and the entire family the fortitude to bear the irreparable loss.

While describing the death as a massive tragedy, the VP condemned the wide spread of kidnappings, deaths and killings of innocent citizens in the country, just as he reiterated the Federal Government’s commitment to community policing system and intelligence gathering to tackle insecurity in Nigeria.

“I think that we can be very hopeful that we would see peace and calm as some of the steps we are taking come to fruition. You know also we met with the Governors in South West and in the different zones and everybody is working to ensure that security is adequate and everybody feels safe and secured,” he stressed.

He also said government was engaging the army so that there would be a bit of more military presence, especially along the roads, while the IGP had already been directed to ensure that there was full coverage of the police, and with the use of helicopters.

“This is to fasten the search for these killers and also to ensure that there is adequate presence to deter this kind of terrible situation from reoccurring,” he added.

Receiving the Vice President, Pa Fasoranti appreciated him for the visit, saying despite being a Sunday and Osinbajo is a Pastor he was still able to make the trip from Abuja to his residence.

In the same vein, Asiwaju Bola Tinubu said the incident that has affected one of the members of their family was seriously sad and unacceptable.

He, however, urged Nigerians not to use the incident to “divide ourselves” but use it as a cure to the security problem facing the country. “Additional police, additional patrol, and additional security reinforcement along Ore road and various black spots are necessary. And we have discussed that one among the various authorities.”

Tinubu who observed that the security challenges in the country are numerous, said it must be fought headlong.