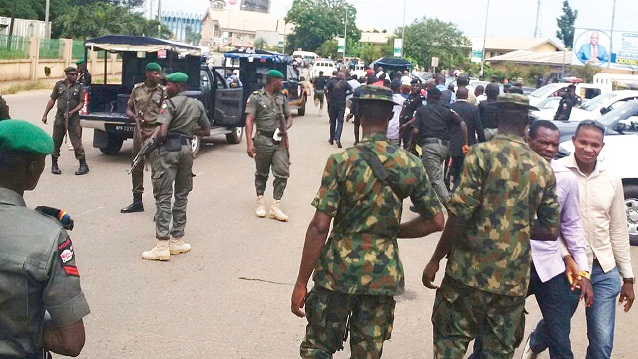 Security operatives in the state have been advised to constantly raid identified crime black spots and kidnappers’ hideouts to rid the state of criminal elements.

They said identified black spots should be effectively invaded through coordinated synergy and intelligence gathering by all the security agencies.

They equally called for the decentralization of the police to effectively address insecurity at state level.

These are the submissions of some Nigerians who spoke with The Hope in separate interviews.

They however commended the governor for his timely warning to the Ebiras in the State based on  investigation that the terrorists that attacked Owo were housed by the Ebiras residing in Owo.

They commended the various steps being taken by Governor to tackle kidnapping and terrorism in protecting the people of the state and the entire South-West region .

Others are Afenifere Chieftain, Chief Femi Aluko and a former Commissioner and Attorney General in the state, Mr. Adekola Olawoye, SAN.

Chief Segun Adegoke advised the state government to comb black spots in the state to rid the state of criminal elements.

His words: “If these black spots have been identified, what is the state government waiting for? What are the security outfits waiting for? If the places are known, can’t they invade the places? Can’t they round up those who are collaborating with the criminals? They should take steps immediately.

“Look at what the Anambra state government did, they went to the black spots, arrested lots of the criminals and was even able to find out that many of the criminals in the state were actually real Igbos. What stops our governor from doing that? It is not enough to expose them to the public. The governor should move faster and do something about what he has discovered.”

He also advised the government to take necessary steps to ensure that the state security outfit, Amotekun is properly equipped with weapons to be able to combat criminals across the state and ensure the safety of every resident.

He said” “Amotekun should be properly armed. Buying ammunition for security outfits in the state should not be disturbed by any law whatsoever. The most important thing is to ensure that the license given to the state government to equip its security agency is not  abused.

An elder statesman and former Commissioner for Information in the state, Chief Femi Aluko, said Governor Akeredolu should be lauded for his  commitment to security of lives and property of the people.

“What he should do now is ask for the assistance of the security agencies in the country, not within the state alone. He should lias with the Inspector General of Police to effectively address insecurity,” he said.

Adekola Olawoye, SAN, immediate past Attorney-General and Commissioner for Justice in the state, said all the identified black spots of kidnappers and their collaborators should be effectively tackled through the synergy and intelligence gathering among all the security agencies.

He also called for decentralization of the police to effectively address insecurity at the state level.

“We should not lose sight of one thing, we and the Ebiras and other ethnic groups have been living together for ages now and our relationship has become a sort of family unification. Many Owo people married Ebiras and many Ebiras Owo. Basically, since I have known them, majority of them have come to this place for farming activities.

“The Governor, to me, without being immodest, what he did to stem the tide of insecurity in this Southern part of Nigeria, particularly the South West, deserves the commendation of any right thinking Nigerian that is resident in this part of the country.

“In respect of what the Governor should do now, a tree does not make a forest. The important thing that can help him and his cabinet now is synergy in intelligence gathering. Intelligence gathering is the bedrock of a good, efficient and efficacious security architecture.

“There must be good collaboration among all the security agencies in the state. Like I have said, a tree does not make a forest. I must say that the Governor has really tried. It is the Constitution of the Federal Republic of Nigeria that made the Governor’s handicap. You say the Governor is the Chief Security Officer of his state and when security issues come up the security heads in the state would need to seek approval from Abuja. So, what do you make of that.

“Let me say this, until the police is decentralized we will not get it right. One Inspector General of Police in Abuja cannot police over 200 million Nigerians

Professor Adebayo Aborisade on his part said the primary responsibility of the government is to ensure the security of lives and property of the people and to protect them against any attack.

“I see the warning from the government to the Ebiras as a timely one especially looking at the fact that investigation  revealed that the terrorists that came to attack Owo were housed by the Ebiras resident in Owo before the attack.

“Furthermore, I think it is noteworthy for me to state that I do not see the governor’s warning to the Ebira Community as profiling in any way as being insinuated in some quarters, if that is the case, then the issue of fulani herdsmen in the country should as well be referred to as profiling.

“The issue is that you have a community that may harbor criminal, miscreants come to an environment they are not familiar with but they identify the people with whom they can relate and this people allowed themselves to be used as a base to launch an attack against the community and you think that is profiling, no, I disagree.

Dr Fasuwon was of the opinion that capital punishment on whoever is found to have caused breach of peace, signing memorandum of understanding with the leaders of Ebira community amongst others will help in preventing a reoccurrence of such attack.

“I feel the government should be proactive enough in executing capital punishment on these evil doers so as to prevent reoccurrence. The government should get a secret police system amongst them, punish any ruler of areas used to house kidnap victims, make public show of criminals in their homestead, confiscate their belongings.

“Moreover, signing a memorandum of understanding to fish out and punish criminals in their home state (Kogi), organizing enlightenment programmes in their various camps against criminalities, occasional night raids of the environment for illicit activities will as well go a long way in addressing this menace among the Ebira community.”