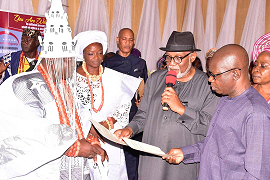 By Adekola Afolabi and Fasusi Martins, Okitipupa
|
Traditional rulers in the South West would soon be incorporated to play  key role in the fight against insecurity.

Governor Oluwarotimi Akeredolu made this disclosure during the official presentation of staff of office to the new Amapetu of Mahin Kingdom ,His Imperial Majesty,Oba Oluwasegun William Akinyomi (Alagwe VII), at Ode Mahin in Ilaje Local Government Area of the State .

He stressed that issues of securing lives and property  required multidimensional approach and so it was imperative that traditional institution, local hunters, youths and other local security apparatus be involved to quash the menace .

“Genuine information to burst potential security threats must be made available on time to ward off all forms of criminalities, “he said.

The Governor charged royal fathers to use the traditional institution as veritable tool to accelerate sustainable development across their domains.

He  enjoined the new Amapetu to make deliberate and concerted reconciliation with aggrieved groups and individuals in his domain.

Earlier  in his address, the Chairman,  Ilaje Local Government, Mr Otito Atikase remarked that the selection process was  peaceful, orderly and in accordance with the Amapetu Chieftaincy declaration.

He added  that  it was the turn of Alagwe Ruling House to produce the new monarch of which  Oba Akinyomi emerged as the winner after diligent selection process by the kingmakers.

In his own remark, Oba Oluwasegun Akinyomi, the new Amapetu thanked the Governor for the approval and subsequent presentation of staff of office to him.

He promised to work for the peace and development of Mahin land.

The new monarch assured the state government of  his cooperation and support on any matter that would bring growth and development to the community and the state in general.