Installation: Oba Ogunoye thanks all for support 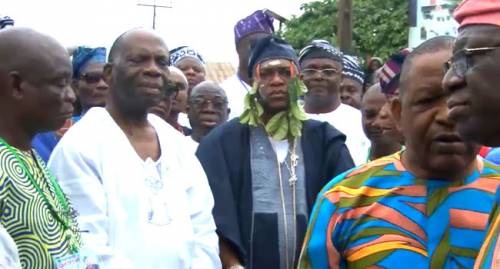 Installation: Oba Ogunoye thanks all for support

From Jimoh Ahmed , Owo
|
The new Olowo of Owo, Oba Ajibade Ogunoye III has expressed profound gratitude to his people, friend and well wishers for the goodwill and support shown to him during his installation.

Oba Ogunoye said he was overwhelmed with joy for the support to make his installation as the Olowo successful and hitch free.

He spoke at a brief appearance at Ugha Court shortly after concluding his installation rites.

Oba Ogunoye said the love and support shown to him was unimaginable and offered prayers for the next 17 days for traditional tutelage promised not to let the people down.

The king, who moves into seclusion for the next 17 days for traditional tutelage promised not to let the people down.

In Owo traditions, the sword signifies the fortunes or otherwise that may play out throughout the reign of any new monarch in the town.

However the anxiety that enveloped Owo prior to the exerecise went down as he picked the Elewokun sword which signifies peace and development.

A highly elated Chief Jamiu Ekungba, the spokesman of the Council of Senior Omolowos and the Ekon Odo Agbara of Owo, described the sword as a sign of development which was associated with the reign of the progenitor of the Olowos.

“God in His mercy has delivered for Owo a monarch that will bring peace to this place”.

It is widely believed that the morning shows the day. The atmosphere today has shown that Owo is again on the part of glory. The programme started very early and there was no heat. The rain appeared to fall but will dizzle for some minutes and stop”.

“Kabiyesi picking the royal sword of Elewokun, the sword of the progenitor of the Elewokun dynasty is an attestation that peace, progress and development has come to stay in Owo”.

“Oba Ajibade is experienced, he was brought up in this palace, he spent 26 years of his life growing up here and so, he is well grounded in the traditions and monarchy. He is an experienced public servant and a lawyer too. He will certainly take Owo to a greater height.

Speaking with reporters, the Ojumu of Owo, Chief Olanrewaju Famakinwa, said that the rites became necessary as being laid down by customs and culture of the ancient town.

He said: “Oba Ogunoye who is being installed today chose a sword which signifies peace.

“Traditionally, before Olowo is installed, he will have to choose a sword at Oke Mapo and it is believed that whichever one he chooses will tell how his reign will be.

“Coincidentally, he chose the same sword chosen by his father more than 30 years ago and the sword represents sword.”

Some people who spoke with The Hope described the installation as monumental in the history of the Owo just as they prayed for a peaceful reign of the new Oba.

Mr Joseph Adekolu, appealed the new monarch to build a robust relationship with the people and endeavour to carry his subjects along in decision making.

Also, Princess Doyin Soares enjoined him to work for the unity of the kingdom.

Oba Ajibade Ogunoye was proclaimed the Olowo after his installation which went through some traditional rites at some designated locations in the ancient community of Owo on Friday.

The installation rites which commenced as early as 6.00am at Igboroko Quarters where the new monarch took two chieftaincy titles of Alamuren and Anaun which was a prerequisite titles before he could be formally crowned an Olowo.

The climax of the ceremony was the symbolic picking of ‘Ada’Elewuokun (traditional sword) by the new Olowo at Ugbo Ogwata at Okiti Asegbo the present site of the Owo Town Hall.