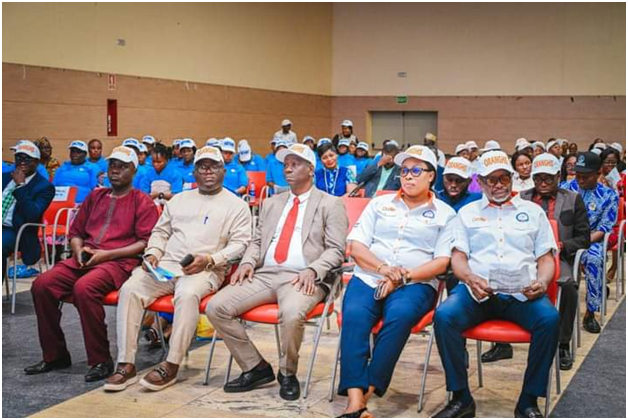 Health is the body’s functional and metabolic efficiency and its ability to adapt to physical, mental and social changes which it is being exposed to. It is the factor that enables an individual perform his daily roles in an acceptable manner thus an healthy person is one who is able to serve himself, community and nation at large.

At times, an individual is limited when he becomes afflicted with sickness thus limiting his productivity for a period of time.

A right thinking government is aware of the fact that a healthy workforce plays an ever increasing role for the economy and that is why the Ondo State Government gives priority to qualitative health care delivery as seen in its massive investment in the health sector. It is not oblivious to the health needs of its residents, hence its passion for putting in place the Contributory Health Scheme through the Ondo State Contributory Health Commission (ODCHC) to cater for the health needs of citizens at no cost. Pregnant women and under five children have been benefitting from this for a while through the Abiyamo Maternal and Child Health Insurance Scheme, hence the Governor is off to a flying start with the establishment of ODCHC.

Oluwarotimi Akereolu, SAN must have been cognizant of the fact that a healthy society contributes to economic improvement among others and this must have informed his decision to stick to his guns in investing in citizens’ health.

The Public Servants are set to benefit from this through ORANGHIS which was flagged off by the Governor, last Tuesday in Akure, the state capital.  No doubt, this will usher in the era of accessing health without out of pocket payment which is in line with the fifth point of his government’s REDEEMED agenda, which is Effective Healthcare and Social Welfare.

The International Event Centre (The Dome) witnessed the influx of dignitaries from all walks of life as the Orange Health Insurance Scheme (ORANGHIS) commenced in the state.

The bespoke attire of the commission which was mostly worn by the creme de la creme in government alongside staff added glamour to the event.

The launch of the scheme attest to the commitment and dedication of staff of ODCHC towards ensuring that public servants key into the insurance package thus, it was indeed a day of celebration for them as another product was rolled out to beneficiaries.

The event also availed the Governor the opportunity to lay the foundation of the commission’s permanent office complex beside the State Revenue House, Igbatoro Road, Akure thus promising a conducive environment in a serene location to staff to effectively carry out their duty.

Speaking at the event, Governor Akeredolu said that his administration has continued to demonstrate political will in attaining Universal Health Coverage (UHC) in accordance with one of the Sustainable Development Goals (SDGs).

According to him, ORANGHIS is designed for all political office holders and civil servants in the State.

He noted that the delight of any Governor in a developing country like Nigeria, is to be able to create a sustainable funding mechanism that lowers the financial barriers to healthcare for the citizenry.

The Governor said:”In spite of the obvious economic constraints across Nigeria, we approved the joint contribution of 3 percent of gross salary of each public servant under a sharing ratio of 1.8 percent by the State Government and 1.2 percent by individual public servant, as the premium for a family health insurance plan, covering each public servant, one spouse and four biological children below the age of 18 years.

“It is on record that we are the only State Government, in recent times, that is taking up the responsibility of a larger percentage (60 percent) of the health insurance premium for public servants. We made the commitment to do so as part of the social welfare promise under the REDEEMED agenda.”

He acknowledged the patriotic support of the labour unions in enthroning the Orange Health Insurance Scheme, saying they have shown maturity, dedication, understanding and true sense of comradeship.

“We also gave effect to the operationalisation of this Law by creating a temporary office space for the Commission, which we officially opened on 24th June, 2019, to begin her mandate of regulating, supervising and coordinating all health insurance activities within the State.

“You will recall that we have begun the implementation of health insurance by paying the premium for pregnant women and children below the age of five years through a budgetary line for the Abiyamo Maternal-and-Child Health Insurance Scheme (AMCHIS) – the first health insurance product.

“I am glad to inform you that the Abiyamo scheme since 3rd December, 2019 till date, has recorded over 24,200 beneficiaries who have not had to pay a kobo for antenatal care, delivery services (including Caesarean Sections) and other allied services.

“Thereafter, we approved the release of the State’s counterpart fund to the Federal Government-funded Basic Health Care Provision Fund Programme (BHCPFP) in order for another set of vulnerable persons in Ondo State to enjoy robust healthcare services.

“Today, 20,560 enrollees, made up of widows, retirees, aged, indigents, women and children below five years are the six categories of beneficiaries receiving care at the 203 Primary Health Care Facilities (1 per 203 wards) with referrals to general hospitals when required under the BHCPF programme.

“The beneficiaries pay no kobo for medical, surgical, gynaecology and several other health care services. We are, therefore, glad that the Ondo State Contributory Health Commission has taken the health insurance conversation a step higher with the third product called Orange Health Insurance Scheme (ORANGHIS) for all public servants in Ondo State.”The Governor stressed.

“Finally, please be assured that the State Government’s percentage contribution and the premium deductions from public servants’ salaries to the Orange Health Insurance Scheme shall not wane.

“I am also aware that pensioners and students shall have their own scheme too. This means that every resident of Ondo State will be brought into the safety net of the Universal Health Coverage.” He said.

In his welcome address, Commissioner for Health, Dr. Banji Ajaka commended the Governor for his improvement in the health sector including the creation of the  State Contributory Health Commission, development of the University of Medical Science Teaching Hospital, purchase of multi million naira worth of medical equipment for Primary Health Care facilities in batches, establishment of the state Drug and Health Commodities Management Agency among others.

Head of Service, Pastor Kayode Ogundele in his opening remarks stated that the Governor has again demonstrated his commitment to workers’ welfare through the launch of ORANGHIS which according to him will improve their productivity

In his remarks, Special Adviser to the Governor on Health, Prof Dayo Faduyile explained that the Sustainable Development Goal(SDG) 3.8 which is about Universal Health Coverage (UHC) will be achieved in the state as the Governor has put in place measures including the Abiyamo scheme for pregnant women and under five children, Basic Health Care Provision Fund and the ORANGHIS for public servants.

Director-General, ODCHC, Dr. Abiodun Oyeneyin while speaking noted that ORANGHIS covers treatment of common illnesses, surgeries, dental and optical care, antenatal care, delivery including Caesarean Section, management of common diseases in children among others at no cost, adding that the benefit package and the scheme’s guidelines will be made available to all.

He promised to put in more efforts in ensuring an improved ODCHC.

Representative of the Director-General, National Health Insurance Authority (NHIA), Mr. Femi Akingbade commended the giant strides of the Governor in the health sector which according to him aimed at improving the welfare of residents.

He explained that Universal Health Coverage is the third priority on the global health agenda and an integral part of the Sustainable Development Goal which according to him many nations including Nigeria is pursuing rigorously.

While congratulating public servants on the flag off of ORANGHIS which he described as an opportunity for them to receive health services at no cost, he called on state government to give unflinching support to ODCHC to ensure the creation of a sustainable pool of fund, adding that the commission should intensify effort towards the domestication of the NHIS ACT.

He assured of NHIA continuous collaboration with a quest to guarantee improved qualitative health care delivery to residents of the state.

In his goodwill message, Director-General, Development Agenda for Western Nigeria (DAWN), Seye Oyeleye while describing health insurance as a critical tool which is important for the achievement of several development outcome, stated that healthy workers are more motivated and productive.

He explained that the scheme is of tremendous importance as the world continues to face inflation adding that ORANGHIS is a step in the right direction which according to him contributes to the goal of achieving UHC in the state.

While congratulating public servants, he enjoined them to key into the scheme.