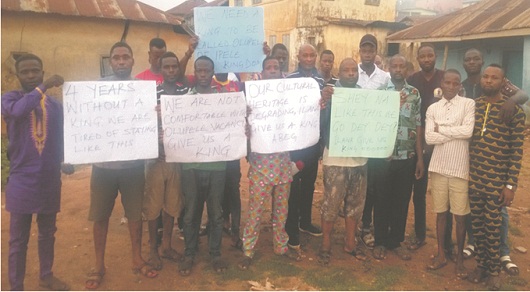 From Jimoh Ahmed, Owo
|
The people of Ipele in Owo Local Government have demanded for the urgent selection and installation of a new monarch for the town.

It will be recalled that the last Olupele of Upele, Oba Abel Alade joined his ancestors in 2015.

However,  the town has remained without a head since his demise.

Worried by the continued absence of a monarch to rule over them, the people, mostly  youths of the community, under the umbrella of Ipele Youth For Peace and Progress filed out on Tuesday to protest the situation.

The Youth from all the four quarters that made up Ipele, Ilana, Okeriwo, Igemo and Oko were carrying various placards like “We are not comfortable with Olupele vacancy. Give us a new king”, ” Shey na like this we go dey? Ilana give us a new king,” among others   marched through the town calling for the selection of a new king.

Speaking with journalists during the protest, the  leader of the youths, Ibrahim Rafiu disclosed that Upele has been without a king since 2015 and all efforts by the community to get a new king proved abortive.

Mr Rafiu  said the absence of an Olupele has put Upele at a great disadvantage and this has has led to increase in security challenge in the community while development has eluded the town.

He therefore called on the state government to prevail on the kingmakers and the Ilana quarters whose turn is to produce a new Olupele to come up with candidates for selection and installation.

A coordinator of the group, Osuntuyi Segun disclosed that although somebody was presented by the kingmakers as an Olupele-elect sometimes ago but the youths and other members of the community upon finding out that the man is not from Ilana who is to present the next king and based on the rotation principle in Upele  rejected  him.

Osuntuyi therefore appealed to the Ilana people to come up with acceptable candidate to the throne for ratification by the kingmakers.

Similarly, Aare Oluwashola Monday who is also the secretary of the group disclosed that the group had written to the kingmakers about the development and also about writing the state government through the Ministry of Local Government and Chieftaincy Affairs for an urgent solution to the problem.