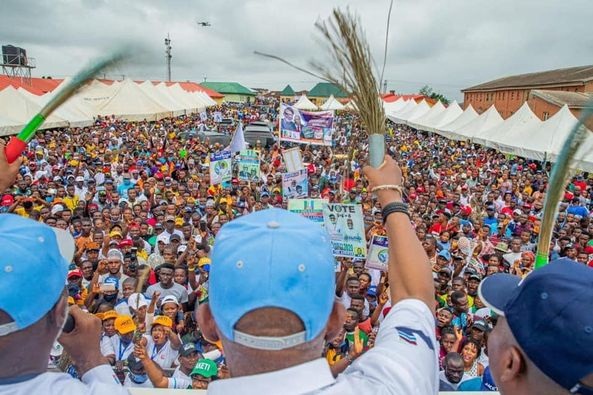 Ode-Irele, the headquarters of Irele Local Government area of Ondo State was locked down following massive turnout as Akeredolu/ Aiyedatiwa campaign train stormed the town in continuation of Governor Akeredolu’s re-election campaign across the 18 Council areas of the state.
As early as 9am, stream of party faithful began trooping out bedecked in assorted party uniforms to welcome the governor.
Some of the members who were backed by drummers and trumpeters sang assorted songs in anticipation of the governor’s arrival.
It was a carnival as the young and the old who are enamored by the APC led government promise to begin a bitumen exploitation business in the ancient town.
Our correspondent observed that the town snowballed into jubilation as soon as the vehicle of the governor drove into the town.
Excited Governor Akeredolu who was visibly happy about the huge turnout waived and acknowledged the goodwill and solidarity displayed by the party supporters and people of the town.
The first point of call was the Palace of Ahaba of Ajagba Kingdom, where Oba Thomas Adesayo, the Odogbo of Ode-Omin, Oba Akinyelure Olorunsola and other royal fathers gave the Governor and his entourage a rousing welcome.
The royal fathers passed a vote of confidence on Governor Oluwarotimi Akeredolu and declared their support for his re-election in the October 10, 2020 governorship poll.
This is coming as a PDP chieftain and former Commissioner for Education in the state, Mr Remi Olatubora, collapsed PDP structure in Irele local government for APC in support of Governor Akeredolu’s re-election.
Also, leaders and members of the Zenith Labour Party (ZLP) and the Social Democratic Party (SDP) in Irele council area also defected from their respective parties and joined the ruling APC.
The Ahaba of Ajagba Kingdom, Oba Thomas Adesayo and the Odogbo of Ode-Omin, Oba Akinyelure Olorunsola who spoke on behalf of other traditional rulers in the area equally congratulated the Governor on his coming victory.
Oba Adesayo noted with satisfaction the open-mindedness in governance of Governor Akeredolu which he has extended to politics that brought about the inclusion of those he called “real politicians” in Irele into the ruling APC.
He added that by the wise decision of the governor coupled with his monumental achievements across the state, Governor Akeredolu would record a landslide victory in the forthcoming governorship election.
Also, the Odogbo of Ode-Omin, Oba Akinyelure Olorunsola said Governor Akeredolu is one of the worthy sons of Ondo South in whom the people are well pleased with his conduct and attitude to societal development.
He commended the governor for always standing by the people at all times by initiating policies and programmes that have made him a sincere advocate of pragmatic development.
Also speaking, former governorship aspirant, Chief Olusola Oke, said the leaders of the APC who are with Governor Akeredolu are those behind the Southern Agenda.
Oke added that the leaders in Ondo South Senatorial district have resolved to wait for the next four years and support Governor Akeredolu to spend his eight years in office.
In his remarks, Governor Oluwarotimi Akeredolu appreciated the traditional rulers for their supports and prayers, with assurance that the people would enjoy more dividends of good governance if re-elected for a second term.
Governor Akeredolu expressed optimism that the economic fortune of the state would further improve in his second term in office to accommodate the requests of the people one after the other.
At the campaign rally held at Methodist Primary School, Ode-Irele, which was attended by party leaders and large crowd of people, former Commissioner for Education in the state,Mr Remi Olatubora, collapsed PDP structure in Irele local government for APC in support of Governor Akeredolu.
The campaign train took the message of development and sustainable economic growth to the people of the local government and the state at large.