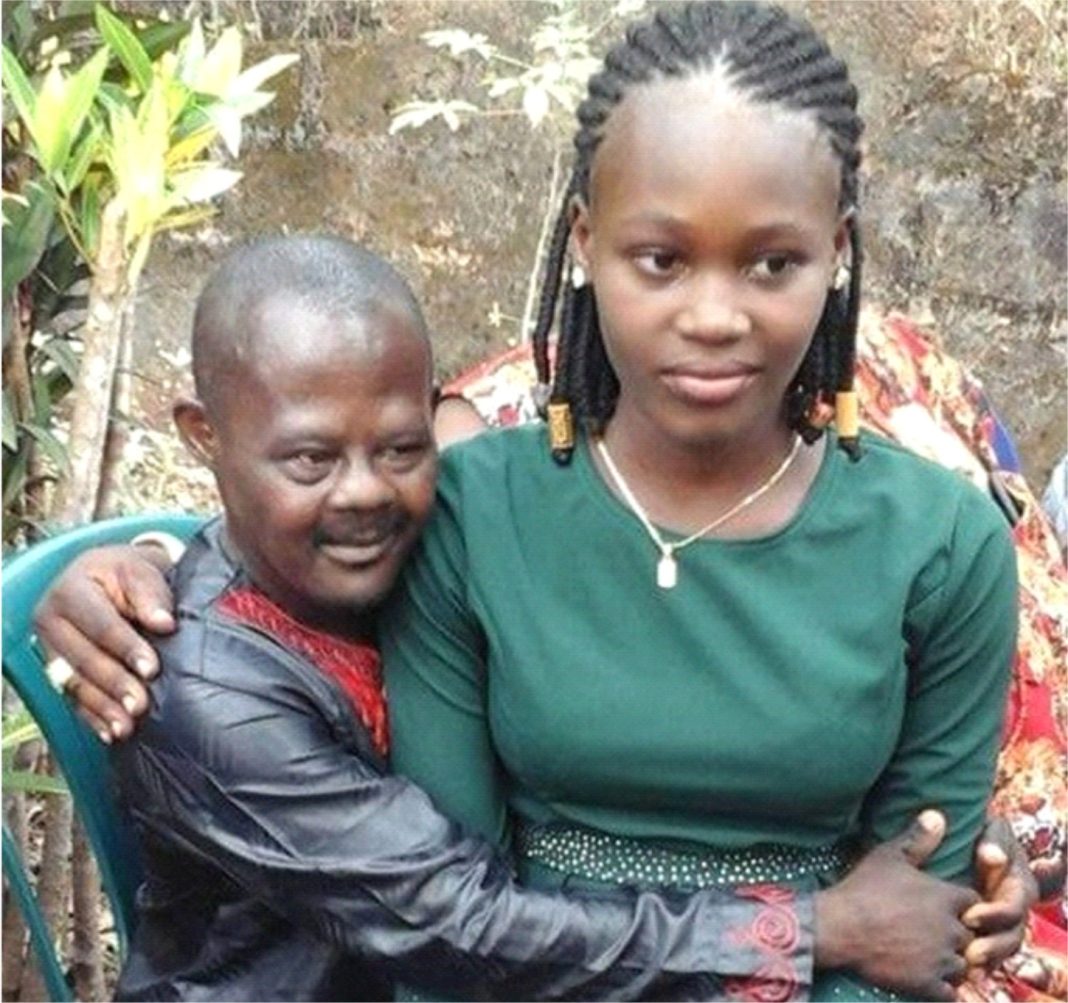 Mrs Kijo (not real name) was very happy when her 17-year-old daughter, Omolara,  introduced a 54-year-old widower, Mr Patrick, to her as her intending husband.

When her daughter declared her intention of accepting her suitor’s proposal, the mother was elated as the man was financially buoyant. Mrs Kijo saw him as an angel sent by God as answer to her prayers of being lifted out of the miry poverty that had been holding her down.

She had not been finding it difficult to cater for her five children since the death of her husband. Her daughter had finished her secondary education the previous year but she did not make her papers.

All entreaties by Mrs  Kijo’s friends to allow her daughter resit for her WAEC examination as earlier planned fell on deaf ears due to the fear that her lucky girl might lose the man to another lady. Her excuse was that her daughter’s suitor had promised to sponsor her through university education.

The preparation began in earnest and Omolara was in the seventh heaven. Unlike most teenage brides that were forced into marriage and were usually in tears during their wedding, Omolara was euphoric.

She invited all her friends and the marriage was conducted in an elaborate way. Rather than feel ashamed, both her and her mother were in the best spirits. Her husband too was happy that he was easily having his way without any problems due to his bride’s age.

After the wedding ceremony, Omolara’s husband relocated his mother- in-law to a well furnished apartment and gave her a car gift.

In Nigeria, the practice of child marriage is deeply entrenched in tradition, culture and religion. The country has one of the highest rate of child marriage in the world, with estimated 42 percent of girls married before 18 years. While this is found among many ethnic groups across the country, its predominance is clearly in the Northern part of the country.

Despite warning by experts that victims of child marriages are prone to domestic violence, sexual and physical abuse and are at risk of death due to early childbirth, some parents are adamant.

Though there is a public outcry against under-age marriage and attempt to prohibit it by amending section 29, sub section 4 of the Constitution, the practice, however, continues with the risks it poses.

One of the reported effects of early marriage is that girls leave school. This means that girls lose the opportunity to acquire knowledge and skills.

Leaving school also takes them away from friends and spaces where they develop social skills and networks as well as support systems. Another is the loss of adolescence since most married individuals immediately take on adult roles and responsibilities.

This can be very stressful. There are also severe reproductive and health risks, abuse of victims’ human rights and a high risk of contracting sexually transmitted diseases.

Some experts also report an association between child

However, opinions differs when The Hope spoke with some parents if they would support their 17 years daughters’ marriage to a rich man.

In the submission of a teacher and a marriage counselor, Mrs Chioma Edeh, a marriage of any lady below age 21 is unacceptable. She described it as a manifestation of gender inequality, reflecting social norms that perpetuate discrimination against girls.

She observed that most of the girls forced into early marriage do not know and may have never met their groom who are usually far older than them.

Threat to education of the girl-child .

Her words: “ In fact, some of these ‘husbands’ are often old enough to be their fathers. The act is therefore a violation of human rights since young girls who marry as children are more likely to drop out of school and have limited independence. As an outcome of child marriage; births increase, and the population explosion undermines the government’s ability to effectively plan and mobilise resources for sustainable development.

“Also, child marriage has great negative consequences on the education of the girl-child. Parents who support their 17 years old daughter’s marriage because the intending husband is rich should be arrested for child abuse. Such parents are callous, wicked and can do anything for money. What if the man has ulterior motive for the marriage, given the security situation of the country? Parents should be reminded that all that glitters is not gold hence, the need to be cautious.”

Sharing a similar sentiment, a self employed man, Mr Folorunso Adu, maintained that no matter how rich a man is, he can never support her 17-year-old daughter to marry him. The man who disclosed that he dislikes the idea of older men getting married to younger girls, warned parents against its consequences.

He asked: “How can parents be so daft to support their underage daughters marriage to rich men? Has poverty level gotten to that? They should be educated that marrying a girl off early denies her right to education which is the bedrock on which the greatness of every society is founded. This arbitrary practice is the cause in elevated cases of some brides who resort to killing their supposed husbands mainly by poisoning them because they are not mentally prepared for marital tasks. Marrying off a lady under 22 years old to me is condemnable.”

Speaking differently, an artisan, Mr Semiu Oyedeji, explained that gone were the days when parents decide who their daughters should marry. He added that If his 17-year-old daughter insisted she wanted to get married to whosoever she likes, he cannot stop her.

He said: “It is believed in Islam that if a girl sees her first menstruation in her father’s house, she should not do the second one there. In as much as the man in question is well to do to take care of her, I will give her my full support. After all, all parents pray for good and rich suitors for their daughters. To me, a lady is matured once she starts menstruating. Besides, age doesn’t determine the success of any marriage because I know some ladies who married at age 28 and above and still experienced  broken homes.  I cannot discourage my 17- year-old daughter from marrying a rich man who will take care of her since I don’t know if the man in question is her right choice,” he said.

ladies who married at age 28 and above and still experienced  broken homes.  I cannot discourage my 17- year-old daughter from marrying a rich man who will take care of her since I don’t know if the man in question is her right choice,” he said.

17 year old not too young to marry, some women insists

Strangely, women that are believed to be ” mother hen” in their attitude have turned around to declare that a 17-year-old girl is not too young for marriage. While some ladies say that they do not mind getting married at 17 years.

A civil servant, Mrs Iyadun Bello, told The Hope that there was nothing bad in giving out a 17-year-old girl in marriage if she so wished. She said that instead of refusing her, she would rather educate her on what she is going into.

Her words: “ My fear is what if I refuse to give my consent and she elopes with the man, what will be my gain? You are talking about 17 years old, when we daily read news about girls who are below 17 years running away from their parents to meet men in other states and countries. The high time parents understood the world we are today the better.”

Asked what would happen to the lady’s education, she said “since the suitor is rich, I will advise him to let her continue her education after marriage just like the case with some ladies in higher institutions.

“Sincerely speaking, no parents will want her 17-year-old daughter to lose a wealthy man because she is underaged. We all pray for good and peaceful home for our daughters which money plays an important role. So far the money is there, the girl’s health will be taken care of. After all, I have read that a 15 -year- old girl gave birth without complications. Education has no age limit,” she said.

Contributing, an undergraduate, Bunmi Fagite, hinted that she could not turn down a marriage proposal from a wealthy man even if she is just 15 years old. According to her, money answers everything in a marriage.

She said: “ The major reason I am struggling to be educated is to have a brighter future I can be proud of as a woman. If God so wish to bring such a man to me, I will be foolish to reject it. It doesn’t matter if my parents agree or not, they cannot dictate to me who to marry. Take a plebiscite across higher institutions in the country, you will see ladies who are not up to 18 years married and being sponsored by their husbands. They are respected more than someone like me who is single because they are living  fine. I don’t mind if I see such a man. I can tell you that most parents will support such marriage because of the man’s financial stand. I am responsible for my future and not my parents,” she said.