IS torture part of police’s investigation ? 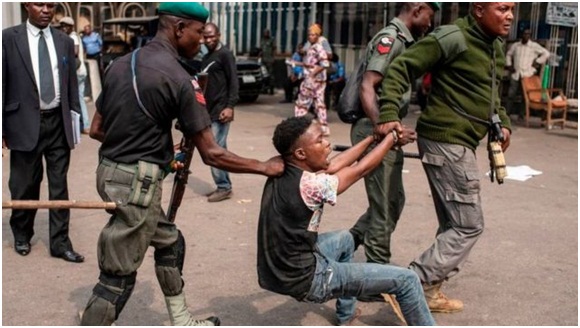 The Nigeria  police will never admit that they torture accused persons in their custody, especially if such persons  refuse to confess to the crimes they were alleged to have committed.  However, it is common knowledge that accused persons go through inhumane treatment while incarcerated.

This development among others gave rise to the EndSARS protest which Nigerians can  never forget in a hurry. The judicial panels established after the fiasco that ensued are testaments to these facts.

In total contrast to the claims of the Nigeria police that statements of suspects are obtained without torture or under duress, a witness in a criminal trial,  Tayo Jaiyeoba, weakened the prosecution’s claim when he narrated before a High Court judge sitting in Akure how policemen beat up two accused persons, Emeka Alieze ànd Dada Ojo, during their investigation over  an armed robbery case when they were  in their custody.

The witness, obviously not properly schooled by the prosecution counsel, had recounted with relish “when the police brought them, they had been badly beaten. Their heads were wet with blood and upon instruction, they quickly began to describe how they carried out the operation to the police”.

The witness, while being led in his testimony by Adewole Oladoye, made the disclosure as he narrated how armed robbers invaded a filling station  at  Isinkan,  Akure,  where he worked.

Reacting to the question on whether torture has been abolished from criminal cases investigation, as demanded by the newly passed Administration of Criminal Justice Law, a former judge who does not want her name in  print said that the law had never supported torture.

Her words: “In fact, if you look at the Evidence Act, it specifically provides by a section there  that if it is discovered that the confessional statement was obtained by torture or threat, it should not be admitted before the court.

“So, from our own end, we expect that the investigation will be without torture. It is only the police that can tell how it is at their own end. When the issue of torture is raised as grounds against the admissibility of  confessional statements in criminal proceedings, we hold what is called “trial within trial” to determine the voluntariness of the confessional statement.”

Sharing his sentiments on the subject, Adekola Olawoye,  SAN,  in an interview with The Hope while he was the state’s Attorney-General, once said “the issue of torture in criminal trials has gone to the winds”.

Tacitly agreeing that the issue of torture exists before, in spite of investigative police officers’ denial of its existence, he  said that the enactment of the Administration of Criminal Justice Law  puts  paid to it.

He stated that this was  the reason why Sections 10 and 12 of the ACJL provide that the evidence or statement of an accused person under no circumstance should be taken without being videotaped.

He believed that if a suspect was tortured before a statement was  obtained,  it would show on the videotape, and enjoined police officers to key into this provision of the law in order to make extraction of confession from suspects torture-free.

A security expert, Gabriel Oyelakin however has a divergent view on involvement of torture in criminal trials.

He advised that it was better if the Nigeria police force should operate in a way that would  work for the Nigerian society, although the country is a democratic state.

He stated that although it  is not ideal to use force to extract confession, but it becomes necessary because some suspects are hardened criminals who would ordinarily not confess unless the police use force.

He believed that Nigeria Police Force was trained to use force in their operations, which was why they excelled  whenever they went for peace keeping missions.

Also, Mr. Hillary Okegbuale, a lawyer, speaking on the issue of torture, asserted that from research conducted by his research outfit, 100 percent of lawyers contacted and  interviewed on the issue said that there was no structure put in place at the police stations to monitor the interrogation of suspects by the police, while 66 percent  of police claimed that such structure existed.

He regretted that the issue of torture could not be adequately addressed, due to non availability of counsel when statements were being taken, which should not be so as police have directories of lawyers at their various stations.

Okegbuale argued that pretrial detention as an aspect of criminal proceedings should be minimized in the Nigerian society, to decongest prisons while citing the overpopulation being currently witnessed at Olokuta Medium Security Prison as an example.

He was however quick to admit that some of the Magistrates he interviewed in the course of his research were favourably disposed to pretrial detention with reasons that it serves as protection, especially for defendants prosecuted for capital offense.

He, however, opined that the pretrial detention was the reason why the issue of torture was rampant.

Some suspects have grueling stories to recount about their stay in police stations.

Another prosecution witness in an armed robbery case in which officers of a bank in Oke Agbe, Ondo State, were robbed also testified about what he went through with the  police before the Magistrate Court released him as there was no evidence tying him to the case.

He said that on the day of the attack, though some  passers by offered to help them, he refused to leave the crime scene until the police came in order to make everything clear to them.

He claimed that the first defendant told him that he had kept N500, 000  out of the money stolen for them to share later but  he refused to cooperate with his scheming.

He stated that their statements were taken by the police and that though the first defendant had begged him not to, he told how he suggested that they should share the remaining money.

Describing how they were detained for four days in Oke Agbe.police station before they were transferred to the State CID in Akure, he said both of them were chained, beaten and tortured to confess.

All his explanations that he knew nothing about the matter only earned him more beating, as they did not listen to him, he claimed.

He said that the investigation of the police later tied his co accused’s brother, Sherrif Fajana,  to the crime and the brothers confessed that they had only implicated him in the crime.

The witness claimed that the police then demanded for money, so that they could release him, but he refused to call his people to bring money.  Therefore, they charged him to the Magistrate Court along with the two defendants.

From there, he stated that they were remanded at Olokuta prison custody for five months until he was released  by the Magistrate Court.

Cases of torture in criminal trials  cannot be put aside, despite police denials. The instances are simply too numerous to ignore. Unfortunately, the innocent also suffer the same fate as the guilty.

It is high time government adequately addressed  the issue, as many innocent people have lost their lives or contacted diseases in detentions.