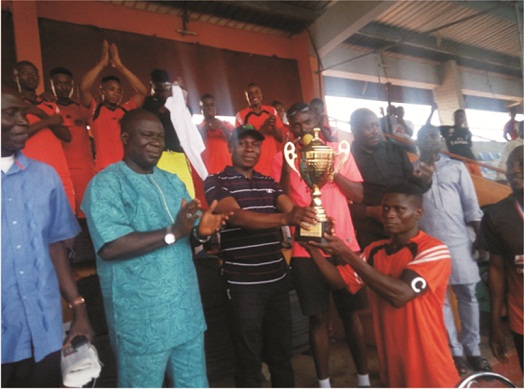 By Femi Atolagbe
|
The Chief Imam of Akureland Alhaji Yayi-Akorede, has advocated for more sports competition for youths in the state to rid them of different social vices.

Akorede  stated this during the final match of the Saka Yusuf Ogunleye Ramadan “Nations” Cup football competition decided at the Ondo State sports complex in Akure .

The cleric urged more well-meaning  individuals to continue to do their best to foster unity through sports.

Akorede noted that Islam supports sports, adding that praying in the Muslim way is also a form of sports, because of the processes involved.

“Even prophet Mohammed (S.A.W) while he was  alive taught us that we should always do exercise, if you see the way we pray, you will observe that we stand up, we bow down, we prostrate so everything like that is  part of exercise”, he said.

He used the opportunity to urge government to always support events that had to do with the development of the youths.

He added that Islam always advocate for things that will bring peace to the society which football symbolises.

The cleric appreciated the governor of the state , Arakunrin Oluwarotimi Akeredolu for his sterling performances in all sectors , he urged him to continue with the tempo.

Ondo State Commissioner for Sports and Youth Development, Mr Saka Yusuf Ogunleye, while addressing newsmen said football must be seen  as a tool that brings people together irrespective of their religion, tribe or where they come from.

The commissioner added that part of the present government policies was  to ensure that we scout for youths from the nooks and crannies of the state, discover their talents and develop them to stardom.

Ogunleye said “through this competition two or more potential football icon have been discovered, I have instructed  that two of the outstanding players in the tournament be invited to Rising Stars”.

“We have seen a lot of promising Soccer icon for this state in the nearest future through this competition, and we will  not going to rest until their potentials are harnessed positively to do the state and the country proud .

“The current government will not stop from giving support to the youth , we will continue to give them space, we will  give them time to show the talent God deposited in them”.

The Sporting Hope gathered that (Cameroon) from Odigbo Local Government defeated  (Senegal)from Akure South  Local Government 4-2 via penalty shootout  to lift the Trophy after both teams had played 1-1 draw in the regulations time .

The Cameroonian goal tender, Akeem Otuyiga and Senegal striker, Kolawole Richard won best goal keeper and best players  respectively, while Cameroon coach, Mr Dimeji won the best coach of the competition, the two players are set to join Rising Stars as directed by the commissioner for Sports and Youths Development in the state.