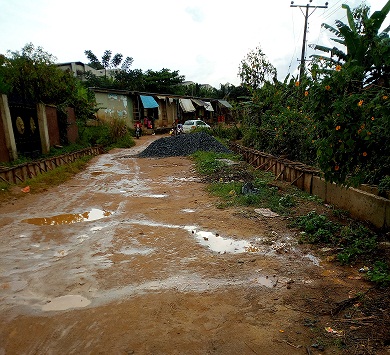 From Francis Akinnodi, Ondo
|
The people of Italuogho Community in Ondo East Local Government area of Ondo State, have expressed happiness over the  ongoing community road project being carried out by the Ondo State Government in collaboration with the Ondo State Community  and Social Development  Agency (ODCSDA).

A cross section of the people of the community, who could not hide their  joy, told  The Hope Metro that, when completed, the road would  enhance the physical and economical development of the community.

A community leader, Mr  Moses Fadoju,  thanked the State government through the  Ondo State Community and Social Development Agency (ODCSDA),  for the timely intervention,  saying the project is going on according to plans.

He said with  the first tranche of the money collected, the community have been able to construct 600 meters dual drainage, a bridge with quality materials according to specification. He said  that when the second tranche is collected, it will improve the level of work done.

Secretary of the Community, Comrade Dele Akarigbo, said before now Italuogho community appeared not to be part of Ondo East local government and the state,  due to neglect of the area by the government.

“I can say without mincing  words,  that the community was neglected by the government both at the local and state level leaving the people of the area to suffer the bad road especially during raining season. Movement of cars and humans were so difficult. But we  are grateful for the intervention of the agency.

“Once again,  it is necessary to appreciate the efforts of Ondo State Community and Social Development Agency (ODCSDA) and the state government for alleviating the problems of the Italuogho people through the road construction.

“Before now,  we have been given specification regarding the type of materials and quality needed for the project. We have collected the first tranche of the money and all materials have been bought according to the specification,  while  the engineer in change is working according to plan. So we are happy and ready to delivery quality work.

“The only challenge we have is that the project is being  executed during heavy down pour. It has been causing a lot of setback. But despite that,   the contractor is still doing his best to make sure that quality job is achieved.

“We are very sure and know that at the completion of the project,  the community as a whole will have cause to thank God and the agency. Even if rain is falling, we will be able to move in and out with our cars without any fear.”

He said in the long run,  the road project,  will boost the economic, social and physical growth of the community adding that  is going to be of great value to the community.

Comrade Akarigbo,  however,  commended the community for their support and prayers since and now that the project is ongoing.

“The community have been so wonderful, they come out to supervise and to encourage the workers and the committee; make corrections where necessary, they have been so cooperative,” he said. ke sure said.