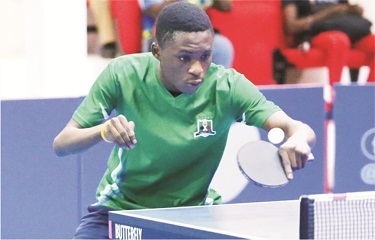 By Femi Atolagbe
|
Ondo State born table tennis wonder kid, Mati Taiwo has once again done the state and the continent proud at the ITTF Junior circuit  and Cadet open world championship in Agadir in Morroco .

Taiwo participated and won two Gold medals in both single  and double under -15.

He also added two bronze medals in under -18 single and in the double event of same category.

Making total of two gold and two bronze medals  he won from the world Junior and Cadet table tennis .

He  appreciated the state government for its unalloyed support so far.

The National table tennis coach therefore appealed to the government to look into their papers for approval.