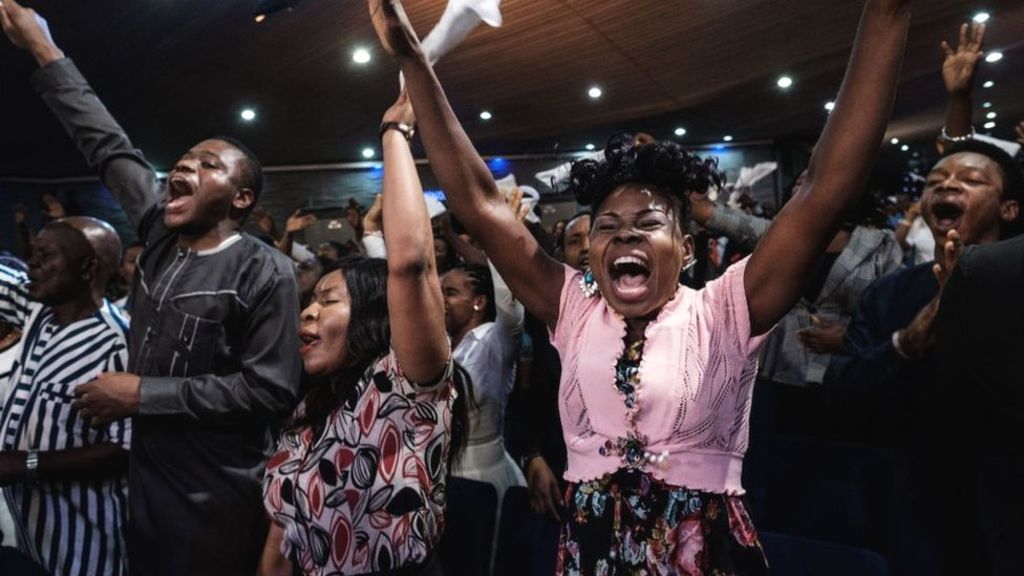 It was a joyous moment in churches across Ondo State yesterday as Christians trooped out to attend Sunday Service after about three months closure.
Members without face masks were turned back while majority of the churches complied with laid down precautionary protocols to curtail the spread of the COVID-19 pandemic.
Some churches visited by our reporters during service hours observed that they were with buckets of water and sanitisers positioned at the churches’ entrances with ushers ensuring that worshippers wash and sanitise their hands before entering.
Churches like The Church of Latter Days, The Redeemed Christian Church of God, Mountain of Fire and Miracles Ministries did not open for service.
At Kingdom Benefits Ministry, Oke-Ijebu, sanitizer and buckets were placed outside the church, and there were only three congregants in a row, all wearing masks, while at C. A. C Oke Idande, also in Oke Ijebu, church special task force was at the entrance to ensure strict compliance. The congregants were arranged in a straight line backing one another like students on Assembly ground.
At All Saints Anglican Church, Ijomu, sanitizer and buckets of water were at the entrance. About two, three worshippers were allowed seated at a row, same thing at Saint David’s Cathedral, all wearing masks. They also maintained social distancing.
A visit to the First Baptist Church, Oba Adesida road, congregants scattered in the Gallery, all wearing face masks, also at First ECWA Church, Alagbaka, there were buckets of water at the church entrance.
At Christ Embassy Church, Oyemekun, it used to be six on a row, but was reduced to three worshippers. Buckets and sanitiser were placed at the entrance while a couple of them wore face masks, the services were however in two sessions.
In Owo, there was a high level of compliance, especially by the big churches but there were some worship centres, especially the small ones which did not comply with the guidelines.
It was the same story in Akoko area where most of the churches visited complied with the guidelines while there were also some churches that failed to comply.
At some of the churches visited, members without nose masks were not allowed to enter the churches.
Our correspondent in Ondo kingdom also reported that worshippers complied with COVID-19 protocol as directed by the government.
At Our Lady of Lourdes Catholic Church, Akinjagunla, Saint Patrick Catholic Church, Yaba, Living Spring Ministries, Ajilo, Celestial church of Christ, Yaba, all in Ondo, worshippers were seen with face masks. Hand washing and sanitizing were observed.
At Cherubim and Seraphim Church Odojomu, members complied with the directives of the state government, while the founder, Apostle Micheal Aladejobi advised worshippers to obey and follow government directives in order not to contract or spread the virus.
Also in Ogbonkowo Anglican Church, Christians were full of praises to God and the state government for allowing religious centres to worship and offer prayers for quick disappearance of corona virus pandemic.
Parish priest of St. Paul’s parish, Ore, Rev. Fr. Philip Ogunsiakan called on all Christians in the country to adhere to all the directives of the government aimed at curtailing the ravaging deadly coronavirus.
The clergy noted that part of the rules considered for the reopening of worship centres in Ondo State was for people to avoid hugging, hand shake and holding of hands during prayers.
“The reopening of churches in the state was timely because it is time to call on God with one voice to heal the land from the deadly virus.”
Mosques in the Ondo North District opened for Friday Jumat service.
At the Owo Central Mosque, where the Chief Imam of Owo, Sheikh Ahmad Aladesawe conducted the service, there was a total compliance with the guidelines.
In addition to hand washing and sanitising, those entering the Mosque were also given tags and those without tags were ordered back.
The service was also a departure from the past where worshippers stayed shoulder to shoulder as a relevant distance were maintained between people.
Speaking on the development, Sheikh Aladesawe, who is the Chairman of League of Imams and Alfas in the state and also doubles as the Chief Imam of Owo said Muslims would not be deviant to the orders of government.
At Afin Akoko Ansar ud deen central mosque, faithful were seen with face masks and adherence to hand washing was observed.
The Acting Imam, Sheik Amidu Fasasi urged Muslims to embrace all protocols attached to the COVID-19 pandemic ravaging every part of the world, noting that government’s effort is to safe the lives of the citizens.
At Ikare Akoko Central Mosque, Muslims obeyed the directives of the state government and similar situation was experienced at Oka Akoko,Isua Akoko, Okeagbe, where Muslims were full of praises to Governor Rotimi Akeredolu for allowing religious bodies to worship and offer prayers to early disappearance of corona virus pandemic and allow normalcy back to the country.
Meanwhile, the Chairman, Interministarial Committee on COVID-19 and Commissioner for Health, Dr Wahab Adegbenro has urged religious organisations to adhere strictly to rules governing the partial lift of ban warning in a statement released to the press.
Adegbenro who said the toll of confirmed cases in the state has risen to 25, said despite the fact that the pandemic is yet to subside, the Governor decided to partially lift the ban on religious activities in the interest of the people.
Dr Adegbenro said Churches with large congregations can hold services in batches and each service, should not exceed two hours.
In his words, Muslims are only allowed to meet on Fridays, while Christians can only meet on Sundays, as weekly services and vigils are prohibited for now.