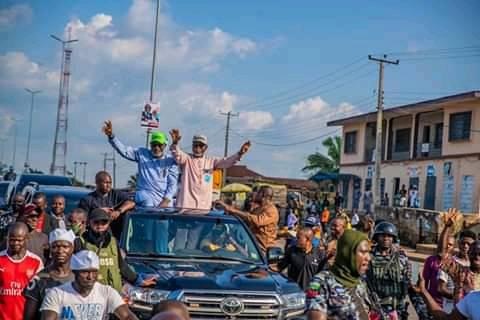 It was a jubilation galore yesterday in Owo, the hometown of the winner of the just concluded October 10 Governorship election in the state, Oluwarotimi Akeredolu.
Immediately after the INEC announced Governor Akeredolu as the winner of the election yesterday afternoon, Owo sons and daughters took to the street to celebrate the victory.
The Governor who was full of joy and appreciation to the people of the state soon joined the highly excited jubilant crowd who had already taken over all the major streets of Owo town with drum beats and songs of victory.
The Governor who was also joined by his deputy-elect, in an open roof vehicle, acknowledged cheers as they danced round Owo town to celebrate the victory with the people.
According to the election result announced by INEC, Governor Akeredolu of the All Progressives Congress (APC) scored 292,830 votes while his closest rival Eyitayo Jegede of the Peoples Democratic Party (PDP) polled 195,780 votes.
The state APC woman leader, Adenike Witherspoon, said the wild jubilation that greeted the victory of Governor Akeredolu was expected because the entire Owo was very happy with the resounding victory at the poll.
She added that the re-election victory was as a result of the laudable performance of the Governor in the past three and a half years in office.