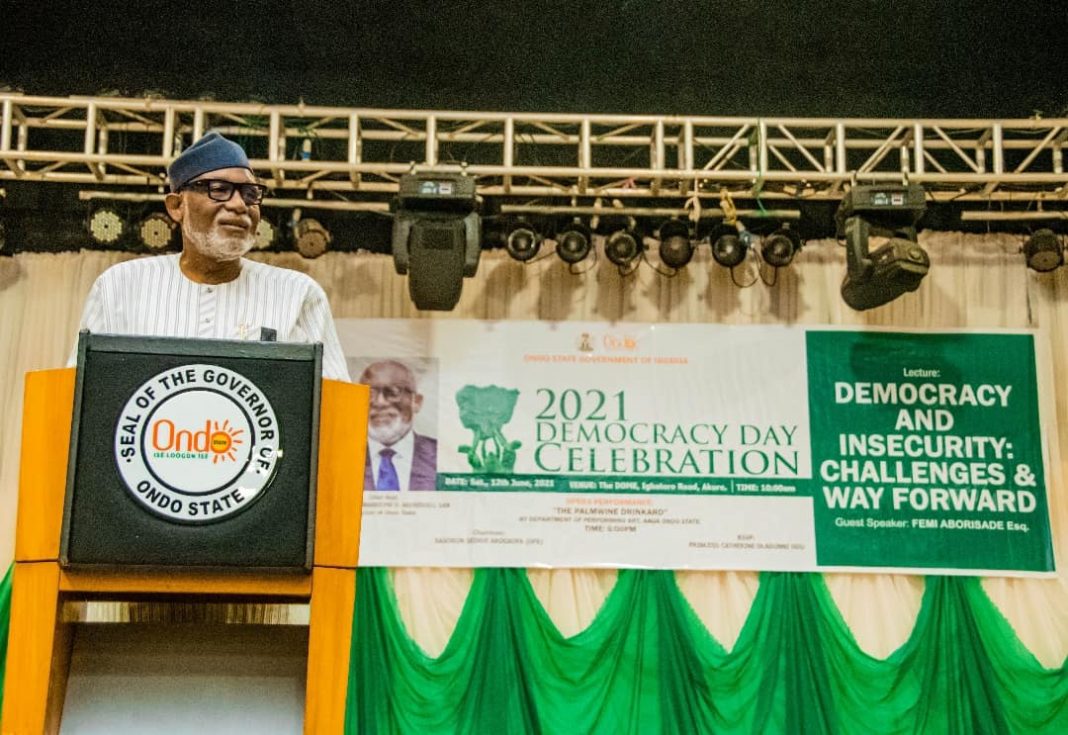 The current happenings in the country suggest that the lessons derivable from the June 12 experience have been cast aside for parochialism.
Ondo State Governor, Arakunrin Oluwarotimi Akeredolu made this known at the 2021 Democracy Day celebration with the theme, “Democracy and Insecurity: Challenges and Way Forward”, held at the International Culture and Events Centre (The Dome), Akure.
He therefore called for an urgent paradigm shift in the country to address the problems of poverty and unemployment which have been the major causes of insecurity confronting the nation.
This is coming as the Guest Speaker at the event, Comrade Femi Aborisade, Esq, lamented that Nigeria has become a killing field with blood stains in every part of the country, decrying failure of all governments since 1993 to say farewell to poverty.
Akeredolu who described as disturbing, the level of poverty in the land as it amounted to a hope deferred, also insisted that the lessons of June 12, 1993 must be imbibed to improve the living condition of the people.
While explaining that the welfare of the people must be at the centre of all governmental activities, the Governor noted that was the message of hope sold to Nigerians by the winner of the annulled presidential election, the late Chief Moshood Kashimawo Olawale Abiola, GCFR.
Akeredolu who also applauded President Muhammadu Buhari for recognizing June 12 as Democracy Day, as the day is not just about Late MKO Abiola but Nigeria, equally called for a viable opposition which he said was Important as part of the key features of democracy.
The Guest Speaker at the event, Comrade Femi Aborisade and the Chairman of the occasion, Basorun Seinde Arogbofa, attributed bad governance to the daily adversities of Boko Haram insurgency, terrorism, banditry, herders-farmers conflicts with the accompanied pains, pangs, agony, wailing, abductions, destruction of farmlands and bloodshed that now characterise daily life experiences in every part of Nigeria.
While saying neither secession nor restructuring alone was the ultimate solution to the problems of poverty and physical insecurity in the country, the Guest Speaker believed that the fundamental solution to the problem of poverty and physical insecurity was a paradigm shift in the philosophy of governance.
Aborisade added that the implementation of the spirit of Chapter 2 of the Constitution of the Federal Republic of Nigeria, 1999 as amended would guarantee the socioeconomic rights of residents of the state.
Basorun Arogbofa, a chieftain of Afenifere, commended the courage and boldness of Governor Akeredolu for keeping his head above waters despite daunting problems, saying “Akeredolu deserves to be encouraged and we have to encourage him so that he can do better, while we continue with our struggle to restructure the country to avoid a break-up”.
The Chairman, who particularly lauded Governor Akeredolu for the establishment of the Amotekun security outfit to ensure the security of lives and properties of the citizens, further commended the Governor for the resuscitation of moribund industries and the creation of new ones to strengthen industrial base and tackle unemployment in the state.